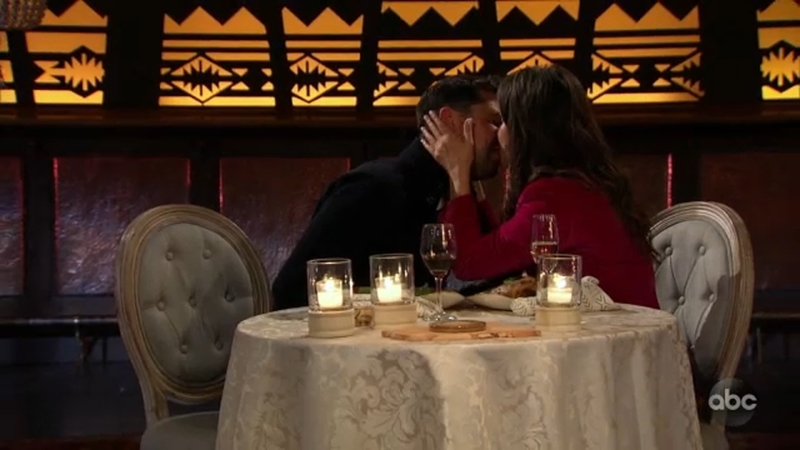 Katie and Michael share a heartfelt moment on 'The Bachelorette'

NEW YORK -- This week, we return to the drama that Karl created just before Katie was about to enter another rose ceremony. Karl had said multiple people were on "The Bachelorette" for the wrong reasons and it made Katie cry. She gathered herself, and told the guys she wasn't going to give anyone any more time at the cocktail party, she just wanted to go straight to the rose ceremony. Greg, who already has a rose, went to console Katie. She seemed to really appreciate him and shared her fears. She has limited time and doesn't want to pick someone who isn't truly there for her.

The men rejoiced, Katie did not give Karl a rose. He looked at her and walked out without even saying a word to her. The guys applauded her!

The date card read, Aaron, Quartney, James, Connor B., David, Justin, Thomas, Hunter, Brendan, Love is about honesty and I need 100%..." Katie met up with the men and took them to a room where former "Bachelor" and "Bachelorette" contestant Nick Viall was sitting. Nick said he's there to hold the guys accountable for things like ghosting women, cheating, or wanting to be the next "Bachelor."

Brendan revealed that he was married and had a daughter and a son. He said that his priorities shifted and he kept telling his wife he had to work but apparently destroyed it while trying to build it because they drifted apart and he ended up divorced. He promised Katie once he gets married again, he will work so hard to maintain that love.

Aaron said that he met a girl after his father had a stroke but then he felt obligated to be with her so they broke up. Quartney revealed he broke some woman's trust. Thomas revealed that he didn't come there 100% for Katie, but he was there for her now. He was there to build his "platform." He said his feelings for her are real. He said that there are people he's led on and that he went on a date the week before he left for the show.

Connor B., our cat man, said that when he was 24 or 25 he dropped out of his Ph.D. program and developed a drinking problem while working at a bar. He would get blackout drunk and say terrible things to people but one night he picked a fight with his girlfriend and then went to a party and cheated on her. He said he blew up his whole life in one day. He did his best to reassure her that is not him anymore.

We didn't get to hear the details of all the mens' stories. Katie decided they all told their stories and she would share too. 10 years ago, on New Year's Eve, she was involved in a situation where there wasn't consent. She said she was in denial about what happened and even tried to form a relationship with that guy, but it didn't work out. She didn't want anything to do with sex after that but then decided to take control of who she is and her life. She's now sex-positive and she's against guilt trips from men about not having enough sex because that happened to her too.

I love you all. Your support is felt tonight and I’m overwhelmed with emotions right now 💕 pic.twitter.com/3moIqhJiyZ

Michael's Past
Michael revealed that he met his life in 2003 and they were together for 16 years. His wife died two years ago. He misses her a lot. It's just awful. Michael said he wants to take risks in his life and start to envision a future for himself and his young son. Katie doesn't yet know that his wife, Laura, passed away. Laura was the only woman he ever said, "I love you" to.

Katie started by giving a toast to the great conversations they had earlier in the day and how close those conversations made all of them.

Justin checked in with Katie first and she said she felt really good about the process and she feels good about all of the men being there for the right reasons. He's worried that he won't stand out enough against all of the other great guys there.

Katie told Connor B. that she loved taking control of her own situation and sharing her story with the guys. She said she feels relieved and she told him she appreciated him being so open with her. They shared another awkward kiss, but he's on cloud 9.

Thomas told Katie that he didn't ask for her, but he believes that they were put together for a reason. Katie said that she wanted to know his red flags, and he just didn't say anything. Aaron said that he has red flags about Thomas. James, Connor B., and Quartney agreed with him, but said Thomas is smooth, what can you do? Thomas, meantime, said to Katie that his intentions would be to marry her if he was the one. He wasn't happy about how his time went through, he knew that Katie wanted more from him and he didn't give it to her. Thomas walked back over to Katie, who had been talking to Aaron, and interrupted them. He said that he wanted to clarify where he was coming from. He said that he has a lot of fear when it comes to her but he's feeling like he has strong energy pulling himself towards her. Katie said she feels an instant spark with him and she's happy he's there. They shared some passionate kisses.

James confronted Thomas about stealing Aaron's time. Thomas flat out said that his time was more important than Aaron's. Thomas then revealed to the other guys that he told Katie that he's falling in love with her. Katie walked back in and grabbed the date rose and gave it to Connor B. Thomas was shocked! Connor B. was elated! David didn't get any time with Katie at all that night...several guys are not fans of Thomas now.

One-on-One Date with Michael
Another date card arrived, it read, "Michael A. Love is an adventure." Katie drove up to Michael in a fancy dune buggy and then went for a ride through the desert. They had a fun and bouncy time together. Michael said what a great driver she was and she confessed that earlier in the day she had flipped it and got a bruise on her knee. Michael talked about how his son deserves a happy dad and this is just a pause for him to explore his future. Michael said, "I know you say that this ends with an engagement, but it really begins with an engagement." They shared an amazing kiss!

That evening, Michael told Katie about his wife Laura and how she passed away from cancer. He cried as he talked about his wife's strength through it all. He said they never gave up hope as they went through every clinical trial they could and visited every hospital looking for answers. She passed away in January 2019. He said that he knows what it's like to love, to give everything, and he's finally ready to open up his heart and start his future. "What a gift to be able to fall in love twice," he said. Katie said that she understands that he had a forever love with her and she's not intimidated by it. Katie felt that the way he speaks about love is just beautiful, it brought her to tears. She offered him the date rose and said that she's also offering it to his son James, and he said yes! "She's someone I could love, 100%," Michael said. She said that she could be falling for him too and, "it's so unexpected!"

The House Rallies Against Thomas
Back at the house, James and Connor B. warned the other men about Thomas and said that he's not there for the right reasons. They were rallying the troops! Hunter tried to warn him, but Thomas said he only has eyes for Katie.

The next day, Katie said that she feels so much hope about finding love at the end of this process. Before Katie arrived, Hunter addressed the group about the flip-flopping and conversations that Thomas is having with Katie and the other men in the house. Thomas tried to apologize, but Hunter said he's just manipulating him. Thomas said he's being sincere with Katie. Hunter said he's not OK with Katie getting her heartbroken. The group asked him if being "The Bachelor" was a priority for him, and he said it was a thought that crossed his mind. He said it's gone from his mind though, but the other guys don't believe him.

Preview of Next Week
Next week, the guys get waxed on a group date. That will bring some funny moments for sure. Thomas's status as a villain gets elevated. And, Blake Moynes from Tayshia's season arrives to vie for Katie's heart!