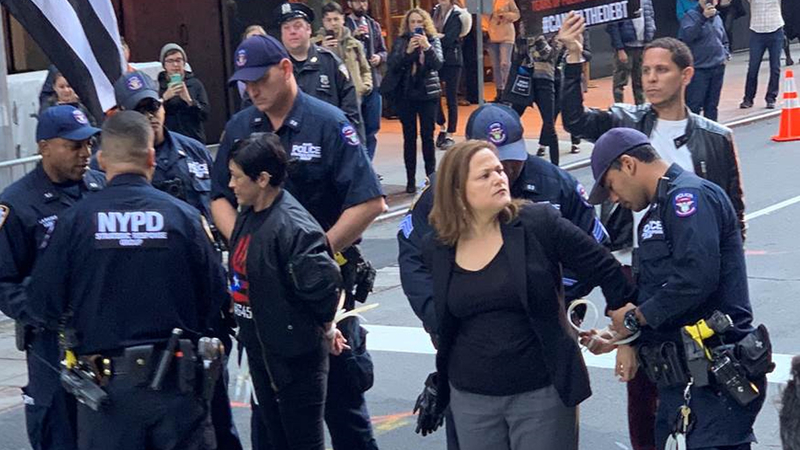 MIDTOWN, Manhattan (WABC) -- At least seven protesters were arrested Monday outside the Museum of Modern Art, which just reopened after completing a $450 million expansion and renovation that forced the famed venue to close for four months.

Members of the Puerto Rican community who feel MoMA trustee Steven Tananbaum profited from the island's financial crisis demonstrated outside, with seven members taking into custody and charged with disorderly conduct.

"For years, Steven Tananbaum has shamelessly multiplied his fortune on the backs of the people of Puerto Rico," Mark-Viverito said. "It's unconscionable, unethical, and downright wrong for anyone to take advantage of a nation who is suffering from a natural disaster. Puerto Rico lost over 3,000 lives during Hurricane Maria, leaving the island with no water, food, shelter, clothes, or healthcare for months. But while many saw this as a devastating national crisis, Tananbaum saw it as an opportunity to make a quick buck. The MoMA must terminate Steven Tananbaum's seat as Board of Trustee and send a message that they will not tolerate someone who has made their fortune on the misfortune of others."

The museum was initially set to reopen to the public on Monday but held a surprise reopening on Sunday instead.

Earlier this month, members of the media -- including our own Sandy Kenyon -- got a first look at the new MoMA.

"You just sit there and go 'Wow,'" MoMA Director Glenn Lowry said. "It was so much better than anything I had imagined."

There are iconic works by the giants of modern art: Andy Warhol, Roy Lichtenstein, Jackson Pollock, and Jasper Johns. But for every Picasso, there is a work by the likes of Faith Ringgold, an African-American artist inspired by him.

"By bringing two different artists together, you always get a new conversation and one that allows you to see each of those works in a new fresh way," Picasso specialist Ann Umland said.

The new wing extends into a new skyscraper next door and provides 40,000 square feet of additional gallery space, a 30% increase. The idea is to make better use of the museum's permanent collection that has remained in storage and out-of-sight.

"There are masterworks here that we were unaware we had," Lowery said.

Each floor represents a different era in art, and the works will change regularly in rooms that have themes. It also feature a multi-media approach, so films play next to paintings, architectural pieces next to photos, for example.

In the original building, the famed Bauhaus stairs look just as they did when the museum opened in 1939, but the dramatic entrance is new and so is the entire experience of visiting MoMA.

"And that means a lot more art, seen in more ways and different ways than we've ever been able to show it before," Lowry said.