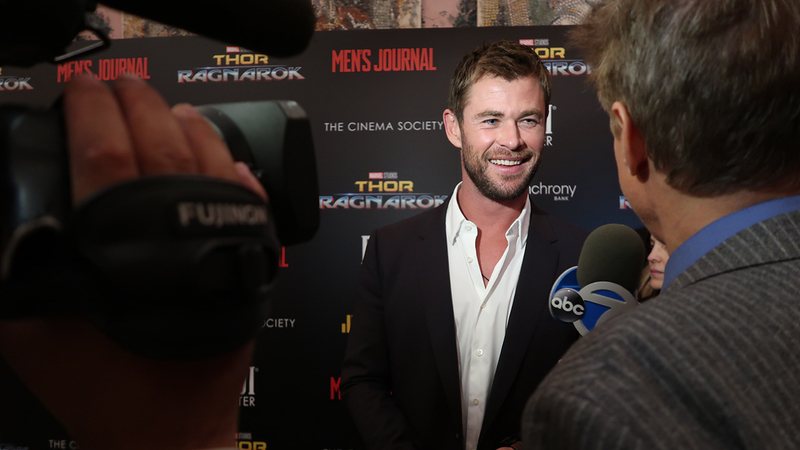 NEW YORK (WABC) -- Marvel Universe fans will likely be headed to the theater this weekend to catch the third installment of the "Thor" franchise, and "Ragnarok" star Chris Hemsworth says there are some big changes in store for this movie.

The film has already opened overseas, where it made more than $100 million, and "Thor: Ragnarok" is expected to gross at least that much, if not more, in North America by Monday alone.

The character finds himself without his famous hammer, which is, of course, the source of so much of his strength.

Fans of the Marvel Cinematic Universe (MCU) may be surprised to find Thor fighting his friend, the big green guy known as The Hulk. Thor even cuts his famous hair over the course of the movie, because Hemsworth argued it was time for a change.

"We shot 'Thor 2' and had a great time, but I kind of wanted to do something different and became sort of bored with what I was doing," he said. "Felt like I was kinda treading water, felt like we had more to offer."

New director Taika Waititi agreed it was time for a modest reboot.

"(I) came in just wanting to inject the whole thing with a bit of life," he said. "And some jokes, and do something different."

He is new to the MCU and hails from New Zealand.

His star is from Australia, and despite the traditional rivalry that exists between residents of the two countries, the pair from Down Under have an easy rapport. The mutual respect is obvious.

"Watching the film, I have to say I was so impressed," Hemsworth said. "His fingerprints were all over it. He didn't get muscled out by the studio system. (Marvel Studios president) Kevin Feige and the whole Marvel gang encouraged his vision."

And more was left to chance, especially given this was a big budget Marvel movie.

Hemsworth called it "unique," in his experience.

"The big majority of the film was improvisation and experimenting and just taking risks, and having fun and having a laugh," he said. "And there is a real spontaneity and adventure to the film that I think, just me personally, I've never experienced before."

An online ticketing service reports advanced sales for the film are running ahead of "Spider-Man: Homecoming," which was a monster hit. It all bodes well for "Thor: Ragnarok," which is from Disney and Marvel, owned by the same parent company as WABC-TV.