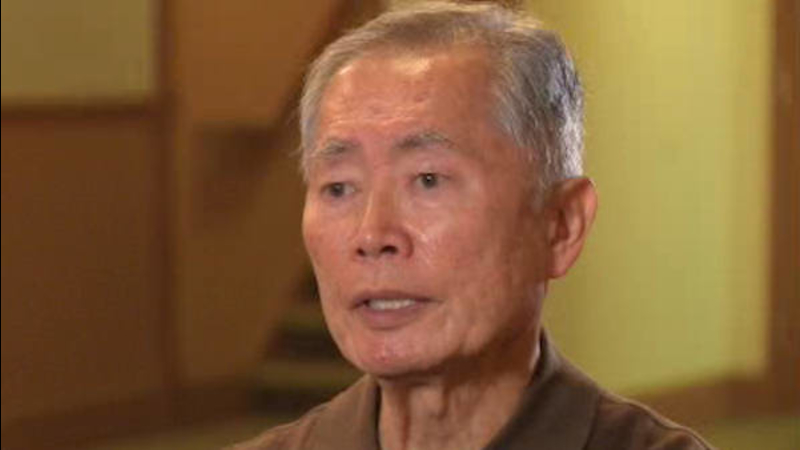 NEW YORK (WABC) -- George Takei may still be most famous for playing Sulu, but the actor is making his Broadway debut at the age of 78 in a role that is light years away from "Star Trek."

His role as a grandfather in "Allegiance" takes place not in the future, but in the past, and it's something that is very close to his heart because he lived through what's been called a shameful chapter of American history. The musical, which opened Sunday, takes place mainly during World War II, when Japanese-Americans were forced from their homes and imprisoned after Japan attacked the U.S.

A witness to history gets to tell his story on stage in "Allegiance," with Takei sharing his experiences during the time period. The show brings to life his memories of being sent to an internment camp by the government after the Pear Harbor attack.

"I could see the barbed wire fence right outside my school house window as I recited the words 'with liberty and justice for all,'" he said.

Along with more than 100,000 other prisoners, Takei spent four years reciting the pledge of allegiance as a child in a couple of different camps.

"My parents were the ones that went through the real anguish," he said. "And the suffering and the loss of that experience."

And it is their experience that is dramatized onstage.

Watching the family cope with their incarceration -- each member in a different way -- brings history alive for the audience and for the younger stars.

But taken as a whole, it is also about resilience.

"It's love for each other that binds us together, ultimately, despite all the fractures that happen to us," Takei said.

Takei said he belongs to the last generation still alive who remembers what it was like to be sent to the camps, and he wants to make sure this chapter of American history is not forgotten. And he's helping to ensure that by helping to stage "Allegiance."