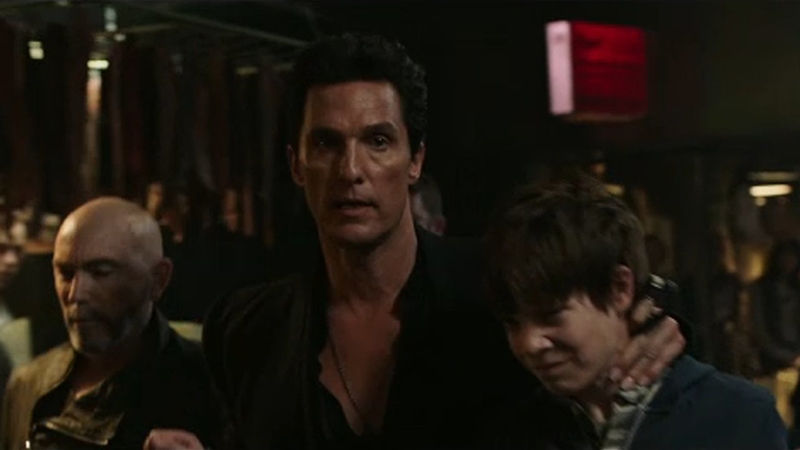 NEW YORK (WABC) -- "The Dark Tower" drew mild applause at a screening I attended, but keep in mind that showing was free, and for sure the critics aren't clapping their hands for this one.

A muddled movie fails to bring-to-life the "Dark Tower" series of best-sellers from one of fiction's modern masters.

"It's been the one story that never really leaves me alone," said Stephen King, author. "I just keep coming back to it."

It's easy to see why Hollywood labored for decades to make a film based on 4,000 complex pages.

Like the books, this story is divided into two worlds: our own, called "Keystone Earth," and "Mid-World" where a bad guy played by Matthew McConaughey is bent on destroying "The Dark Tower" that keeps the universe in balance.

The only way to take down the tower is to use the mind of a talented child, and given the dreams Murray Hill resident "Jake's" been having, he seems like a good candidate, but he escapes the bad guys minions and travels through an old portal to Mid-World where he finds "Roland"

He's a gunslinger played by Idris Elba and the only man capable of stopping McConaughey's character.

The pair go back and forth between the two worlds and their rapport is the best part.

Tom Taylor rises to a tough challenge: holding his own opposite a couple of big stars at the peak of their powers, but it's not enough to save the picture.

I kept wishing these guys were together elsewhere: in a much better film!

The chief virtue of "The Dark Tower" is that it's short: just an hour and a half, but that's also another reason why the movie is not worth your money.

Receipts at the box office are down this summer and that's no surprise given bad movies like this one.
Report a correction or typo
Related topics:
arts & entertainmentmovie reviewsandy kenyon
Copyright © 2021 WABC-TV. All Rights Reserved.
TOP STORIES
Teen stabbed to death during fight over parking spot in NYC: Police
Here's what will be closed or open for Juneteenth
Concern grows over low vaccination rate in some NYC communities
Young mother among 3 killed during bloody night in NYC; 10 shot
Biden signs bill to make Juneteenth a federal holiday
SummerStage kicks off in NYC with jazz performances
Bear found dead in NYC parking lot suffered "blunt force trauma"
Show More
1 dead, 3 shot, 9 others injured in Arizona shootings
NYC, tri-state could see remnants of latest tropical storm
Curious kids get behind wheel of Yonkers police car, ask officer questions
Man dies after jumping in East River to retrieve volleyball
Bucks bounce back to beat Nets 104-89 and force Game 7
More TOP STORIES News