So excited to join this show!! @KellyRipa crushes every morning... one of my favorite people ever #livekellyryan

Kelly Ripa introduced her new co-host on the show on Monday after a months-long search. The number one daytime entertainment talk show in America has gone by the name LIVE with Kelly as Ripa appeared with dozens of guest co-hosts over the past 11 months.

Seacrest will move to New York for the job, but he'll continue his daily radio show and other ventures, he said. Ripa joked about how this would be added to Seacrest's many jobs by saying, "He's just giving up breakfast."

In a behind-the-scenes video, Ripa told Seacrest, "Let's kill it!" ahead of the show, and she said she was "inexplicably nervous."

Ripa and Seacrest's first guest was Chris Pratt, whose movie Guardians of the Galaxy Vol. 2 is out this week. 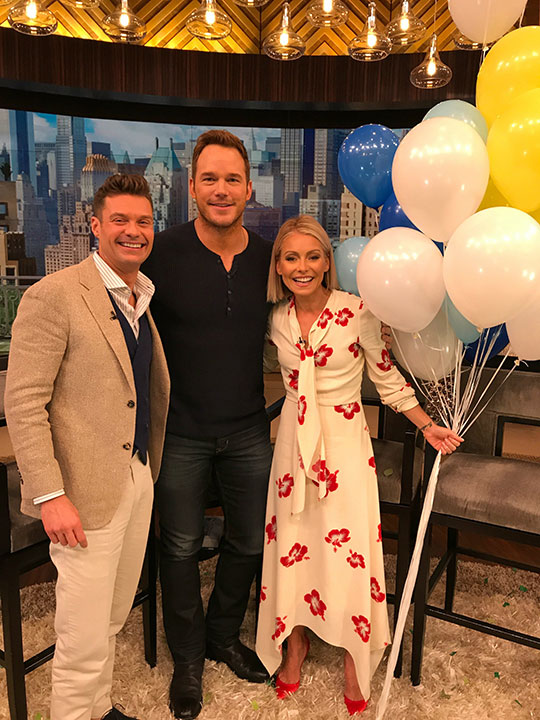 The co-hosts of ''LIVE with Kelly and Ryan'' pose with their first guest, Chris Pratt of ''Guardians of the Galaxy Vol. 2.''

The longtime host took the time to thank everyone involved in the search process, especially all the guest co-hosts who sat beside her. She was excited, she said, to finally have a new co-host, especially someone she knows so well.

Ripa pointed out that the day of the announcement is also her 21st wedding anniversary with husband Mark Consuelos.

"May 1 is a great day for me personally and I think for me professionally," she said. "It just feels like very good karma."