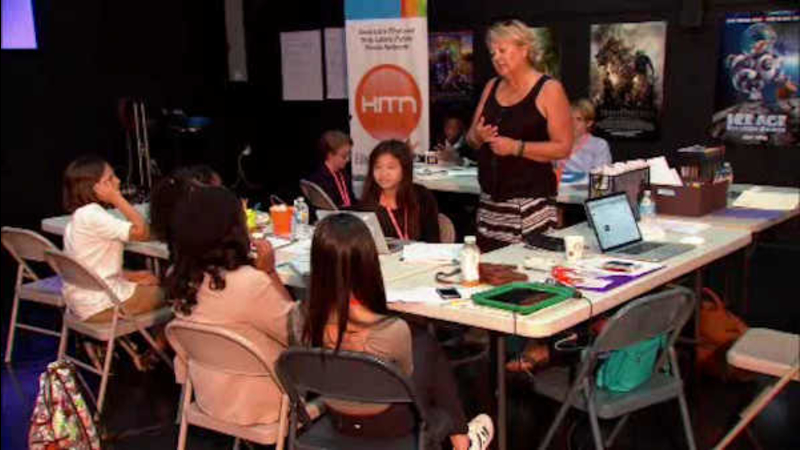 NEW YORK (WABC) -- As regular viewers know, I often take young people along to help me review movies aimed at pre-teens and teens, so I have come to rely on the advice of Ranny Levy and her non-profit group "KIDS FIRST!".

So when she asked me to come and learn more about the group at a "boot camp" in Brooklyn, I quickly accepted.

The kids are aged 8 to 18 and they are everywhere that show business is happening.

The stars seem delighted to talk to them.

The kids take their place on the red carpet alongside the adults.

Millions of people have seen their reports and heard their reviews and "KIDS FIRST!" encourages each of them to speak their mind.

"You get to find your voice and your identity and that's really cool," said student film critic Shelby Ronea.

The young people are taught how to best give their opinion, during a special "boot camp" for young film critics at the Brooklyn Navy Yard.

"I really didn't like to write a lot before, and now I really like to write" said student film critic Na' Im Smith.

"I really like movies, and I like writing about movies as well so it's really fun to blend two things I like to do," said student film critic Benjamin Price.

"My main goal as a film critic is pretty much to reach other kids and help them decide if they want to see a movie or not," said student film critic Linda Derry.

All of the young people take turns in front of and behind the camera.

"What's the hardest part of being on camera?", I asked student film critic Lainey Anderson.

"The hardest part is looking natural and like remembering what you're gonna say," Lainey said.

But the skills they learn here extend well beyond show business.

"When they leave here we want them to be able to use these skills to critically think in general," said "KIDS FIRST!" long-time board member Ed Greene.

Ed is also a vice president at the Hispanic Information and Telecommunications Network, H.I.T.N., which plays host to the boot camp in Brooklyn.