Kentucky reaches title game thanks to another late Aaron Harrison 3 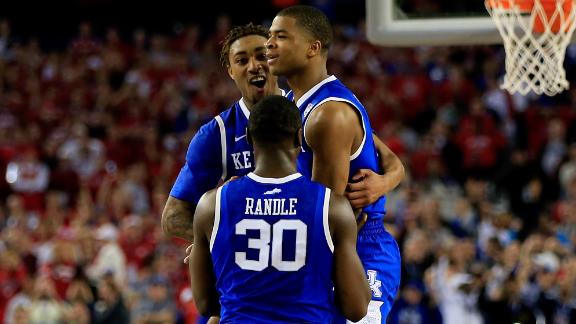 ARLINGTON, Texas -- No, this was not an instant replay, though it certainly is turning into a highlight loop that Aaron Harrison and his Kentucky teammates could get used to watching.

Harrison took a pass from his twin brother, Andrew, spotted up from NBA range and watched the ball rattle in for the lead with 5.7 seconds left Saturday night to lift the Wildcats to a 74-73 victory over Wisconsin in the Final Four.

It was a near carbon copy of his game winner last weekend in the regional final against Michigan. It was almost as clutch as the 3 he made the game before that helped Kentucky take the lead for good in the Sweet 16 against Louisville.

"You can't be scared to miss, and you want to be that guy that wants to take the big shots," Aaron Harrison said.

"He has that clutch gene," Wisconsin's Sam Dekker said.

Traevon Jackson had a last-second shot to try to beat the Wildcats (29-10), but the desperation jumper rimmed out, and once again Harrison found himself at the bottom of a dog pile at center court. Sophomore Alex Poythress' leg bent backward in the scrum. He was icing his left knee afterward but said he'd be OK for Monday's final.

Eighth-seeded Kentucky will play seventh-seeded UConn -- the highest seed total to play for the title since they started putting numbers by the names back in 1979. The Wildcats, who missed March Madness last year, haven't lost a tournament game since the 2011 semifinal against UConn.

"I know how good they are, but I don't know how they play," Kentucky coach John Calipari said of his next opponent.

Second-seeded Wisconsin (30-8) set a Final Four record by going 95 percent from the free throw line -- 19 for 20. But that one miss cost the Badgers dearly. Jackson got Andrew Harrison to jump into him while attempting a 3-pointer with 16.4 seconds left. His first free throw rimmed out, and -- after he made the next two -- Wisconsin had a 73-71 lead and Kentucky had the ball.

Any doubt where it was going?

"Coach said he wanted me to take the shot, my teammates have confidence in me, and I just fed off that," Harrison said.

Against Louisville in the regional semifinal, Harrison was open in the corner when Julius Randle found him. He hit the go-ahead 3 with 39.1 seconds left on the way to a 74-69 win.

Two nights later, there were 2.3 seconds on the clock and Harrison was a few steps right of where he was Saturday when he took the pass from his brother. Michigan's Caris LeVert hit Harrison's hand as he shot from about 24 feet but the ball went in anyway. After that one, the freshman calmly backpedaled before his teammates reached him to congratulate.

This time, it was Josh Gasser in his face at around 25 feet -- a big step back from where the NBA line would be. The ball clanged in and Harrison trotted backward for another muted celebration.

A few minutes later, he was hugging his mom in the stands.

"He was pretty deep out there," Gasser said. "He hadn't really looked to pull up for a shot the entire game. I saw him start to rise up, and I tried to contest the best I could. I thought I did a good job, but he made another good shot."

It was Harrison's only attempt from 3 all night; the Wildcats went only 2-for-5 as a team.

James Young went to the rim hard in the first half and led Kentucky with 17 points. Randle finished with 16, but only five boards to snap his string of three straight double-doubles.

But Kentucky did damage in other ways on the inside, finding the answer for Wisconsin's do-everything 7-footer, Frank Kaminsky, who was held to eight points and five rebounds.

Ben Brust and Dekker had 15 each for the Badgers, who came up a game short of their first appearance in the final since 1941.

Instead, it's Kentucky going for its ninth national title and second in three years, with an almost completely rebuilt roster from 2012. It's the way Calipari does it, like it or not, and it hasn't all been easy sailing. The team that was ranked first in the preseason poll fell out of it completely for the start of March Madness.

Only then, did the Wildcats start playing to their potential.

"They know I believe in them. Aaron knows," Calipari said. "If you've watched us, we have a bunch of stars on this team."

Aaron Harrison is the biggest of them in this tournament. If he chooses to leave after Monday, he'll have first-round potential, though it won't be his final numbers in this game -- eight points, three rebounds -- that will impress the scouts as much as his final shot.

"He was smiling, like he knew he was going to make it," Andrew Harrison said. "He's a big-time player. I've never seen anything like it."

Kentucky Stuns Wisconsin
SportsCenter Highlight of the Night: Aaron Harrison hit a 3-point shot with seconds left to lead Kentucky to a 74-73 victory over Wisconsin and a spot in the title game with Connecticut.

Aaron Harrison: 'It Feels Amazing'
Kentucky guard Aaron Harrison breaks down his game-winning jumper to lift Kentucky past Wisconsin and into the national championship game.

Kentucky Stuns Wisconsin
SportsCenter Highlight of the Night: Aaron Harrison hit a 3-point shot with seconds left to lead Kentucky to a 74-73 victory over Wisconsin and a spot in the title game with Connecticut.

Aaron Harrison: 'It Feels Amazing'
Kentucky guard Aaron Harrison breaks down his game-winning jumper to lift Kentucky past Wisconsin and into the national championship game.