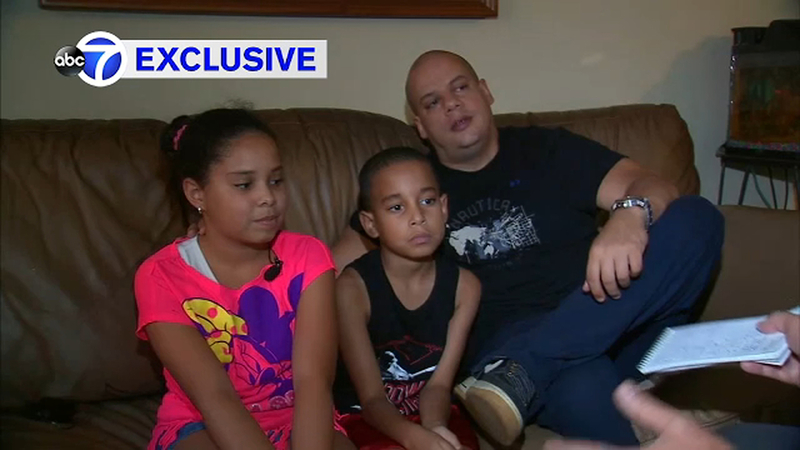 BUSHWICK, Brooklyn (WABC) -- An intruder stormed an apartment in a home invasion in Brooklyn and tied up two young children, taping their mouths and binding their feet.

As the man ransacked the apartment, one of the siblings picked up a cell phone and secretly called for help, a call that may have saved their lives.

It was clearly a frightening ordeal for a family in a Bushwick neighborhood. There are two very brave children though, who spoke to us exclusively.

"As soon as my daughter called me and told me there was a man in my house and tied her up, I just went crazy, nuts," said their father, William Rodriguez.

And all he could do was to get back home as quick as he could.

Angelina's mother Ada stepped out of the apartment quickly to switch loads of laundry in the building.

But in those brief moments, a stranger came down the hallway, picked their apartment and rang the doorbell. Angelina thought it was her mother.

"When I opened the door it was a stranger and he just pushed me and my brother," said Angelina.

"He said bad words to us. He said sit down and he said shut up," said Angel Rodriguez.

They told me he then grabbed a roll of tape and two knives from the kitchen.

"He taped them up by the feet like that and my daughter as well. And then he taped their mouth," said William Rodriguez.

But not their hands. As the man went to ransack the bedroom, that's when Angelina, with instincts well beyond her years, grabbed the telephone.

"I called my father and I put it on speaker so he could go and think that my dad was coming," said Angelina. "I was just thinking in my head because if I don't call my father, maybe something even more bad is going to happen. So I just called."

After hearing William's voice, the intruder suddenly fled the apartment.

"I got here in less than three minutes, thinking that I was going to find this man downstairs but he got away," said William.

They don't think he was there more than five minutes, but was probably caught on security cameras in the building. And what does William think?

"She had a lot of courage to do that, you know. I applaud her," he said.