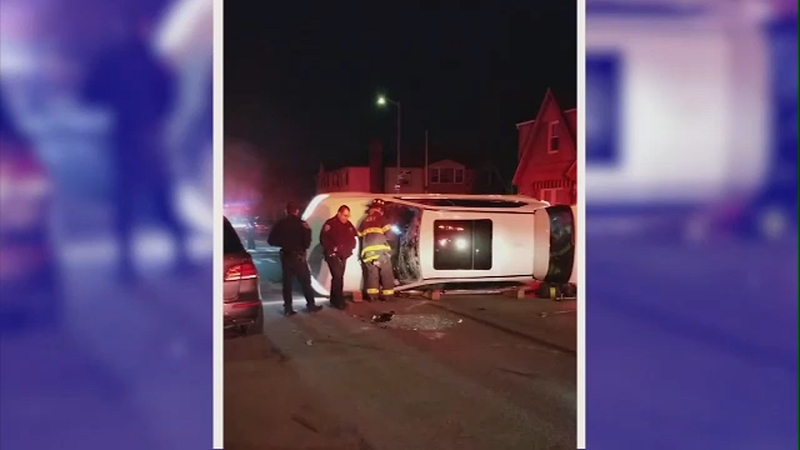 MIDDLE VILLAGE, Queens (WABC) -- A woman was hospitalized after a wild car crash in Queens.

The accident happened just after 5 a.m. Sunday on 82nd Street in Middle Village. Neighbors on the quiet, narrow street heard the sound of the crash, and quickly rushed out to help. However, moments before emergency crews arrived, to their surprise, the driver was nowhere to be found.

A man was pulled from the white BMW SUV. In the backseat of the toppled vehicle was a female passenger.

Guiffre quickly pulled out his cell phone to capture video showing first responders focused to get that woman out by using the Jaws of Life. The woman appeared conscious as she was placed on a gurney.

"She was in shock - she was totally in shock," adds Guiffre.

Guiffre says the woman identified the driver as her husband, and was asking for her husband when he was gone and nowhere to be found.

"(Her husband) seemed aware enough to disappear when the police showed up," added neighbor Marlene Biegner.

EMS confirms they responded to a single-car crash with two injuries, however they say they only treated one person, a female. She is listed in stable condition at Elmhurst Hospital.

Lucky for the woman, she had Good Samaritans looking out for her.

"When you see something like that you got to get out - especially this, and you have to be quick about it," said Guiffre.

Police say they do not have an update on the male driver.