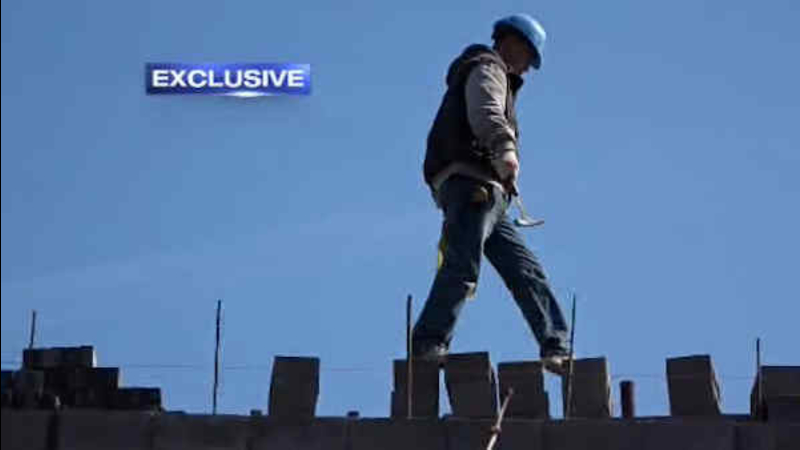 BRONX (WABC) -- A construction site that has been called one of the most dangerous in New York City and has been hit with thousands of dollars in fines was somehow allowed to stay active, until the Eyewitness News Investigators got involved and started asking questions about who was overseeing the site and its safety.

The site has a reputation for its unsafe operations, but the Department of Buildings thought they fixed it a few months ago when they kicked the contractor off the job.

That's when a new builder took over, but as we discovered, workers were still taking huge risks. Earlier Friday, in response to our investigation, the city closed down the work site.

The seven-story, 25-unit apartment building being constructed in the Bronx ranked among the worst sites in the city, racking up so many fines for endangering its workers and the public that late last year, inspectors kicked the general contractor off the project.

But as video taken by residents as recently as last week showed, the risks and the dangers at the site continued.

It included workers doing masonry work along the edge of the building, leaning over the wall while lifting heavy concrete blocks. Some walked dangerously along the edge with a heavy cement-filled bucket, while others were wearing safety harnesses that weren't attached to anchors to prevent them from falling.

It was a high-wire act without a net that concerned neighbors, who said they've repeatedly brought to the attention of the buildings department.

But the building owner, Ray Kahn, disputed that there were unsafe conditions.

Kahn: "I'm following all the procedures."
Eyewitness News reporter Jim Hoffer: "That's not what this video shows. These workers are without safety harnesses. I mean, if they would trip or slip here, they could fall to their death even. Sir, could you just take a look."

While the contractors have changed, Kahn has remained a daily presence at the non-union work site. When we tried to get him to look at video of workers routinely taking risks, he refused.

Hoffer: "What do you have to say about this? You have tens of thousands of dollars in fines here. As the owner, don't you have some responsibility?"
Kahn: "I have more responsibility than you."
Hoffer: "Then why do workers continue to work unsafely?"
Kahn: "They are working safely. Please get away from me, because I told you they are working safely. Every step of the way is being followed."
Hoffer: "Then what do you have to say about this video? This is proof they are not working safely."

Experts didn't have to think twice.

"If you're going to work like that, you don't belong in the business," Mason Tenders Safety Director Sean Brenner said. "You just don't."

Brenner is the head of safety training for union mason workers, and he came to a quick conclusion.

So why would a general contractor take the risk?

As a result of our investigation, the Department of Buildings slapped an immediate stop work order against the site Friday afternoon. A spokesman said the order will not be lifted until enhanced safety measurers are put in place.

The current general contractor, New York Fast, insists none of the workers currently at the site is employed by them.

The Department of Buildings issued the following statement: