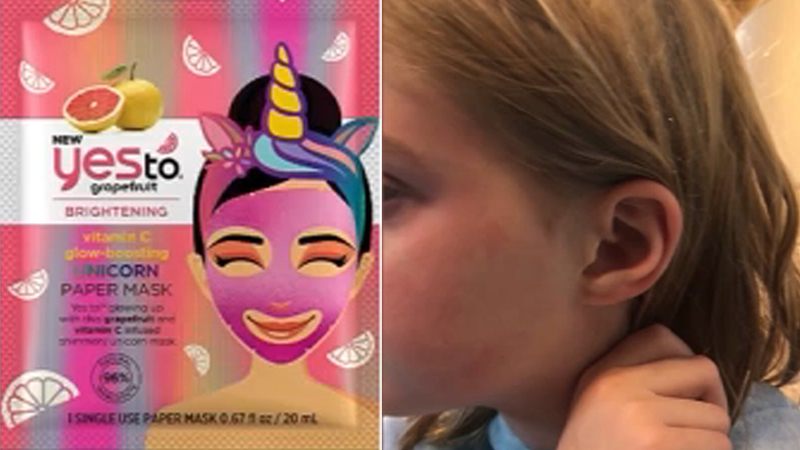 DES MOINES, Iowa -- An Iowa stepmom is claiming that a face mask, featuring a unicorn on the outside package, burned her stepdaughter's face.

A company called "Yes To" makes the mask. The product the young girl actually used is called the "Vitamin C Glow-Boosting Unicorn Paper Mask." It is sold at places like Target and Ulta Beauty.

Chelsea Anders said her stepdaughter had the mask on for about two minutes before the young girl felt it burning her skin, so Anders told the girl to take it off.

"Her face was welted with red, swollen, itchy, raised abrasions. I had first thought chemical reaction. It's what a lot of people had assumed when using this product was that it was just an allergic reaction. Then, doing the research after I had seen what had happened, it looks like a chemical burn," Anders told WHO-TV.

A dermatologist examined the ingredients and said some of them are lactic acid, fragrances and Vitamin C, which is a powerful antioxidant usually recommended for anti-aging products and not for younger kids.

Anders said she also has an issue with the marketing. She feels it looks like it's being marketed to children because of the unicorn imagery on the package, even though the recommended use is for people 18 and older.

Reviews on Ulta Beauty's website show others also saying that it burned. Some people gave it a low rating.

Doctors suggest staying away from using paper masks that cover the entire face.