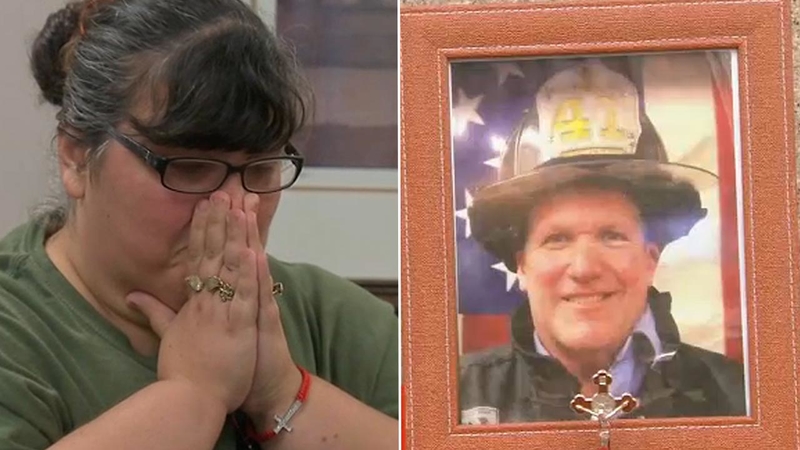 THE BRONX, New York (WABC) -- Charity groups are showing overwhelming support for the FDNY firefighter who died in the line of duty.

The Stephen Siller Tunnel to Towers Foundation, named after a fallen 9/11 FDNY firefighter, announced Wednesday that it will be taking on the mortgage on the family home of FDNY Lieutenant Brian Sullivan.

"It is a great relief to know that my family's mortgage is going to be taken care of," said Sullivan's widow Irene.

Sullivan, a 27-year veteran of the FDNY who served with Squad Company 41 in the Bronx, died of a heart attack at his Orange County home Saturday morning after responding to seven emergency calls, including a fire in the Bronx, during his last 24-hour tour of duty.

"Lieutenant Sullivan spent more than half his life, nearly three decades, keeping New Yorkers safe," said Tunnel to Towers Chairman and CEO Frank Siller. "My brother Stephen was an FDNY firefighter who lost his life saving others on 9/11. I'm proud the foundation established in his memory can help the family of one of his FDNY brothers following this tragic loss."

The Tunnel to Towers Foundation is asking all New Yorkers to join its mission by going to Tunnel2Towers.org and donating just $11 per month. This monthly donation allows the foundation to immediately step in when tragedy strikes.

Other organizations have shown support for the fallen FDNY firefighter as well. The NY Police and Fire Widows' & Children's Benefit Fund, also known as Answer the Call, will give the lieutenant's widow $25,000 to assist her with immediate expenses.

Answer the Call said it hopes to eventually raise enough funds to provide Irene with annual financial assistance each year for the rest of her life. On average, the organization provides a widow or widower with over $300,000 in total support over the course of his or her lifetime.

Sullivan is the 1,153rd member of the FDNY to die as a result of injuries sustained in the line-of-duty. His funeral will be held at 11:00 a.m. Friday at Sacred Heart Church on Still Road in Monroe, Orange County.