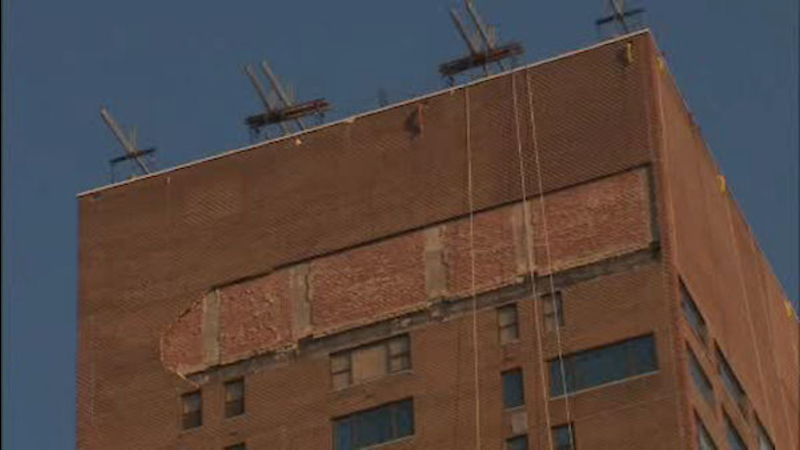 UPPER EAST SIDE, Manhattan (WABC) -- There were new problems Friday for people on the Upper East Side, as it turns out the issue that caused bricks to fall off the side of a building may be worse than first thought.

The situation is expected to create a traffic mess through the weekend, and a stretch of First Avenue may not be open again until Monday. The Department of Buildings has determined that the unsafe bricks have to be taken down by hand, one-by-one, in sections to keep the building from crumbling.

First Ave will likely remain closed between 62nd and 64th this weekend in the area where bricks fell Monday.@ABC7NY pic.twitter.com/Adjn6rebrE

The buildings department issued a vacate order on a wood-frame five-story residential building at 346 East 63rd Street, which is near the 35-story high-rise where the bricks fell from, after inspectors became concerned that some bricks might penetrate the structure. There are 16 apartments, and the Red Cross is aiding seven families seeking assistance for shelter.

"We had two and a half hours to evacuate our building," resident Akilah King said. "It's been crazy."

Dozens of tenants were sent packing late Thursday afternoon in new wave of evacuations three days after the first bricks fell to the street below.

"We all got a call from our landlord at around 3 o'clock saying that we all need to vacate the building in the next three to four hours, because it was no longer safe to live there," resident Michael Connon said.

On Thursday, city building inspectors discovered a series of cracks in the remaining facade directly above the collapse. No one was injured or killed in the facade collapse, but several apartments in that building were vacated for safety reasons.

"If you actually look at the wall that came out from the wall above, that all needs to be removed," OEM Deputy Commissioner Frank McCarton said.

Sidewalk scaffolding went up along First Avenue Thursday, and with the avenue closed for blocks, rush-hour traffic was colossal. It was a major challenge for ambulances heading to and from hospitals on the East Side.

"I hope that fix this as soon as possible and we can go on with our regular life," tenant Rachel Surizon said.

Contractors say the new damage may delay further installation of netting on the building. They anticipate late Sunday or Monday morning for the streets to be reopened to vehicle and pedestrian traffic.

"The Department has been working closely with our partner agencies and the contractor since the collapse late Sunday to secure the building's facade. Our engineers closely inspected the unstable facade section and developed a multi-step plan to secure the site and demolish unsafe brick sections, which must be done before we can reopen the streets and allow displaced residents back into their homes."
Related topics:
evacuationmanhattan news
Copyright © 2022 WABC-TV. All Rights Reserved.
TOP STORIES
2 dead after vehicle found floating in pond in New Jersey
Greater flexibility for at-home learning as NYC students return
De Blasio will not run for governor
Wake today for murdered 19-year-old Burger King worker
1 person critically injured in NYC apartment fire
AccuWeather: Sunshine returns, cold
Show More
Driver arrested after 15-year-old girl killed by school bus in NYC
Cold case team shines new light on betrayal of Anne Frank
Airlines ask Biden administration for 'immediate intervention' on 5G
COVID Updates: 'Fully vaccinated' in Hawaii now means booster shots
How much snow fell across the Tri-State
More TOP STORIES News