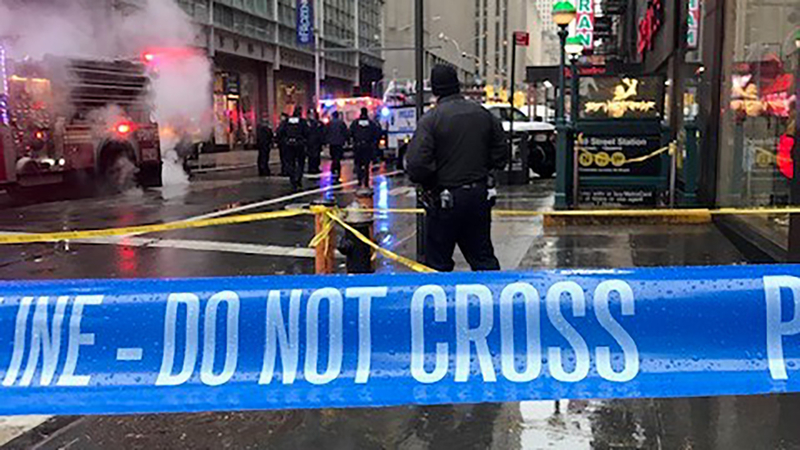 MIDTOWN, Manhattan (WABC) -- A 60-year-old woman walking on a Manhattan sidewalk was fatally struck by a piece of falling debris Tuesday morning.

EMS responded to a report of a person in cardiac arrest, and the victim died at the scene.

The investigation revealed that the person was struck by an object that fell from a building.

The Department of Buildings responded to a report of an unstable facade.

The victim was identified as 60-year-old Erica Tishman, a well-respected Manhattan architect and vice president at Zubatkin Owner Representation. She was a trustee of the Central Synagogue in Midtown and served on the board of the Educational Alliance.

The DOB released the following statement:

The building received approval/permit to begin masonry repair work on its facade at penthouse and roof in July 2019. The DOB investigation continues, including whether a scaffolding should have been placed around building.

The DOB has ordered the property owner to erect a sidewalk shed, and the sidewalks shed company is on site installing the shed under observation of DOB inspectors.

"We are saddened by this tragedy and our hearts go out to the family. The company will fully cooperate with the city in the ongoing matter."

"Sometimes you look up and wonder how safe these buildings are. It turns out in some instances, not very," said State Senator Brad Hoylman.

He wants a criminal investigation because city records revealed inspectors knew this was a possibility eight months ago when the building was cited for the damaged terra cotta.

The landlord paid a $1250 fine but never actually fixed the problem, the city said.

"I'm afraid that's what looks like happened," said Hoylman. "The owner did not fix a violation and now we have today's tragedy."

"It is with great sadness that we write about the passing of Erica Tishman, an invaluable force and irreplaceable ally to our organization. Erica served on the EA board for more than a decade, three years of which she spent as our Board Chair, the first woman to do so in our 130 year history. Under her leadership and support, EA flourished. She oversaw some of our milestone projects: the rebuilding of the Manny Cantor Center, the opening of our Center for Recovery and Wellness, and, most recently, our work on the 14th Street Y.

But Erica not only gave over her time, resources, and professional talent to EA, she was deeply connected to our community and staff, judging our Youth of the Year contest, giving out annual Peer Awards for staff members, and regularly visiting our campuses and programs. Despite rotating off of our board earlier this year, Erica continued to be deeply engaged in our community - just two weeks ago, Erica - along with the Central Synagogue community - volunteered at their annual Thanksgiving dinner for families at P.S. 188.

There is one word that encapsulates Erica: indefatigable. To every opportunity, meeting, or event, she always brought her full self. Her presence will always be felt in every corner of our organization.

In the coming days, we will announce more formal ways in which we will honor Erica's life. In the meantime, we send our sincere condolences to her husband, her family, and to all of her friends who are shocked by this tragic loss."