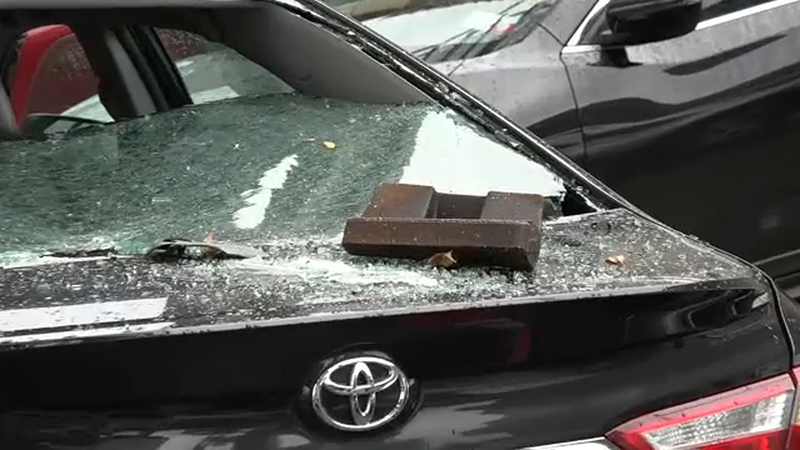 OZONE PARK, Queens (WABC) -- A livery cab driver in Queens had some frightening moments Tuesday when her car was struck by falling debris.

The driver, Anna Leonardo, was parked under the elevated A subway line at 100th Street and Liberty Avenue in Ozone Park.

She was waiting to pick up a customer when she said she heard a big boom.

The driver turned around to find her rear windshield and trunk smashed by a large chunk of metal that broke loose. It was a 20 pound rail part known as a D-wedge.

Anthony Olivencia was just about to get into the back seat of the car. "I forgot something and I walked right back and boom, it happened," he said. "It was in 30 seconds."

("The fact you were supposed to get in that car, that's pretty frightening"?, we asked.) "It is, to think that I skated that," said Olivencia.

Fortunately the driver and her husband were not hurt, but were shaken by the ordeal.

MTA crew members responded to the scene to investigate the incident.

New York City Transit President Andy Byford said the debris fell into a wire basket that was designed to hold it, but did not.

It is the latest of eight incidents of debris falling from elevated subway tracks in New York City this year.

Byford said additional inspections will be done on all 60 miles of elevated tracks in the city and more than 2 million parts.

"Hand check every basket, not just a visual check," said Byford. "They will put hands on the basket. They will check that it's in the right alignment."

Additional netting is also being installed in four locations.

"One piece of debris falling off the overhead is one piece too many," said Byford. "We recognize the danger that presents. We are determined to cut this out."

After his own close call, Olivencia welcomes the increased inspections. "God bless that nobody got hurt, honestly," he said.