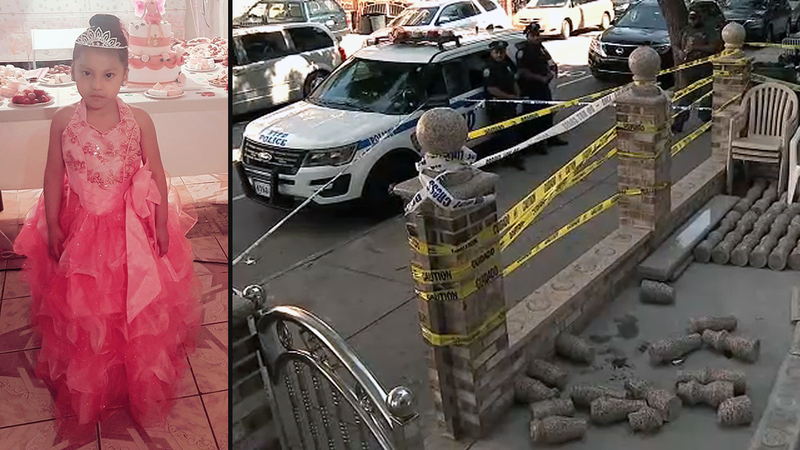 BUSHWICK, Brooklyn (WABC) -- A 5-year-old girl was killed in Brooklyn when a piece of a fence fell down on her Thursday night.

It happened around 9 p.m. on Harman Street in Bushwick.

Police say Alysson Pinto-Chaumana was walking with her mother when the decorative fence suddenly gave way, and portions of it came undone and struck her.

She fell to the ground, where she suffered a severe head injury.

Dad Jose Vega told Eyewitness News in Spanish that losing a daughter is the most tragic thing someone can go through in their life, and that little Alysson always wanted to be a doctor.

Surveillance video from the home shows her playing in the front yard of the home when the fence, approximately 3 feet high and 6-feet long, collapses.

Her mother flagged down a passing ambulance, and the girl was rushed to Wyckoff Hospital where she was pronounced dead.

"The mom, horrible sight, they were holding her up," neighbor Justine Walsh said. "I think she knew already how bad it was, and the ambulance came and went very quickly."

The family is calling for an investigation into the fence, as it had just recently been installed.

Alysson's uncle lives on the third floor of the home, and the family was visiting him. He tells Eyewitness News that they are not doing well.

The landlords, who live on the first floor, had just paid a contractor to put the fence in a few months earlier.

The family says the little girl may have been playing on it causing it to teeter, but the video shows she was standing in front of it when it came crashing down.

"The baby did not climb on it, it just fell down," landlord Harry Netchandro said. "It's very hard to believe how the fence can drop like that."

The Department of Buildings ordered the landlords to take the fence down Friday. They say permits were never needed for the work, and there were no violations shown.

The DOB did note that they did not receive any complaints about the fence prior to the incident.

The investigation into the young girl's death continues.