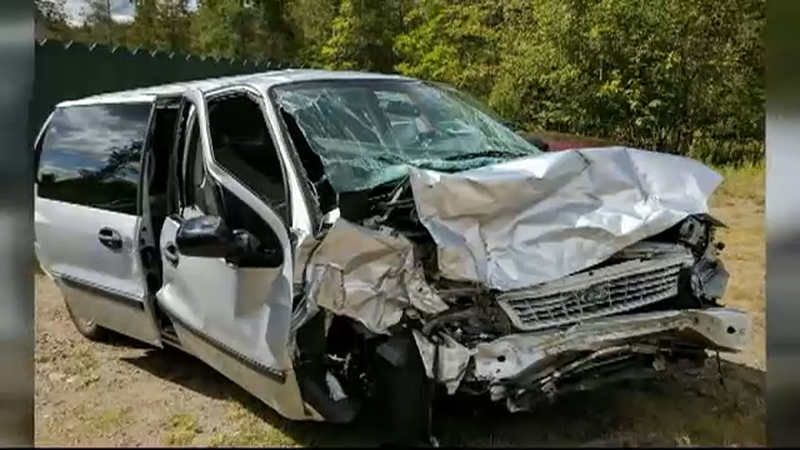 NEW YORK (WABC) -- A family in upstate New York is searching for a good Samaritan who came to their aid after they were involved in a head-on crash with their three young children in the car.

Everyone is OK, and the family says the stranger helped care for one of their boys during the chaos.

The Doubrava family was enjoying a family vacation in the Adirondacks when tragedy struck. They were driving back to their campsite when a car in the opposite lane tried to pass another vehicle.

"I saw the car behind the car in the front whip out and floor it into our lane to try and pass it," dad Cory Doubrava said. "It smashed head on into us."

Along with Cory in the car were his wife Sara and their three children, Matthew, Kelsey and Jacob. Cory described how he carried two of his boys from the crash scene, while the stranger jumped into action.

"I was carrying Kelsey and Jacob," Cory said. "A guy grabbed Matthew and carried him to the side and held him the whole time."

The stranger stayed with Matthew until help arrived, and he even gave the boy a special gift to help through the scary situation.

"At the hospital, Matthew showed me this coin, and we asked him where did he get this coin?" Cory said. "And he said the man that was holding him in the ambulance."

The family is thankful for the man's kindness, and the coin offers some clues to his identity.

Researching it, the family discovered it was from Air Force basic training.

"It was emotional to know that people are selfless," Cory said. "This meant a lot to somebody, and he knew that my son needed something. This is the only thing he had to give him, and he gave it to him."

The man took off before they got his name. The family has taken to Facebook in an effort to track him down.