As Phase 2 began, Bill Ritter finally got a haircut and for a good cause 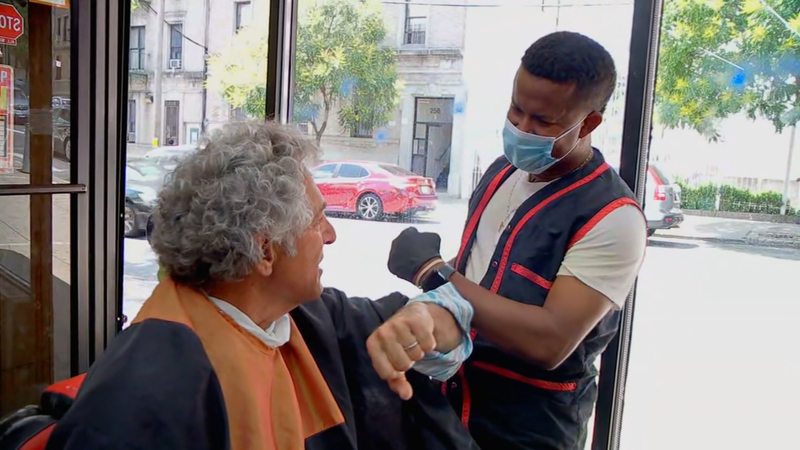 As Phase 2 began, Bill Ritter finally got a haircut and for a good cause

NEW YORK CITY (WABC) -- Bill Ritter headed to the barbershop for the first time in months on Monday to get a haircut.

Bill headed to Jancy Barbershop in the Bronx, where owner Jancy Pichardo has been a barber for over 25 years.

Like thousands of barbershops in our area, it has been closed due to the pandemic. The shop opened its doors on Monday, June 22 and Bill was first in the chair!

The experience was live-streamed on all ABC7NY platforms as a way to raise money for the largest provider of family shelter in New York City called WIN.
EMBED More News Videos

Bill Ritter headed to Jancy Barbershop in the Bronx, where owner Jancy Pichardo has been a barber for over 25 years.

Like every other New Yorker, Ritter was shell-shocked when the city came to a complete halt in March as the COVID-19 crisis worsened.

When Gov. Andrew Cuomo shut down hair salons and barbershops on March 20 as part of the lockdown, Ritter made a promise to viewers that he would not cut his hair until barber shops reopened in New York City.

"I'm thinking I'm not cutting my hair until this crisis is over," Ritter said during a newscast in mid-March. "I haven't told my bosses yet."

So after a story by @mcharlesworth7 about how closure of personal service biz like hair and nail salons will affect people during the #coronavirus — I said this about not cutting my hair till the virus is over. pic.twitter.com/qk3sUzpkxB

For over 17 weeks, Ritter has kept his promise, and as his hair kept growing, Ritter began to look like his 1970s self, when he was a cub reporter in California.

Been looking at old photos of me with long hair as it appears I will for the first time since feb 20 - get haircut or trim next week as nyc barber shops open This 1973 pic at my first reporting job pleading with readers to find vandals of our newspaper vending boxes pic.twitter.com/vv7YpJctVu

Now, New York City is entering Phase 2 of reopening and barbershops were able to get back to work on June 22, so Bill got his long-awaited haircut.
That news has brought great joy to some, in particular his wife, but others are sad to say farewell to the curls that have attracted a cult following. Since making his no-haircut vow, Ritter's hair had become a character in and of itself on TV screens and social media.

In early June, a super fan even created a Twitter account, "Bill Ritter's Hair," dedicated to posting appreciations of his shaggy mane. With over 600 followers, the account has fans even on the Eyewitness News team.

Reporter N. J. Burkett tweeted, "The audience has demanded this, and now it's finally here. @billritter7 is growing up on @ABC7NY. Literally."

The audience has demanded this, and now it’s finally here. @billritter7 is growing up on @ABC7NY. Literally. https://t.co/ofNryBM8hv

In the last couple of months, Ritter's hair had become a symbol for all New Yorkers with his slogan, "we're all in this together."

As a way to show that we are all truly in this together, Ritter partnered with the largest provider of family shelter and supportive housing in New York City, called WIN, as a way to give back to the community through a generous donation. WIN runs 11 shelters and more than 300 supportive housing units across New York City. They also provide housing for over 4,600 people each night.