WICHITA, Kansas -- Wichita police and the Federal Bureau of Investigation continue to search for a missing 5-year-old boy who was last seen Saturday afternoon.

KAKE reports Lucas Hernandez was last seen around 3 p.m. on Saturday near his home in the 600 block of South Edgemoor. Wichita police said the boy's stepmother last saw Lucas at around 3 p.m. Saturday when she then took a shower and fell asleep. Officers were notified around 6:15 p.m. that the boy was missing.

READ MORE: Great-aunt of missing boy says she saw signs of abuse before he disappeared

The FBI has deployed its Child Action Rapid Deployment team to assist in the search, and the Wichita Police Department has activated its Emergency Operation Command Center.

Lucas has brown hair and brown eyes, weighs 60 pounds and is 4-feet tall. He was last known to be wearing black sweats, white socks and a gray shirt with a bear on it. He's a pre-K student at Beech Elementary School.

Officer Charley Davidson with the Wichita Police Department said Tuesday morning that about 100 law enforcement officials are helping in the search for Lucas.

"We are going to be there as long as it takes," Officer Davidson said. "Right now, our concern is to find Lucas."

Since the weekend, teams have searched Chisholm Creek Park, Dr Glen Day Park, Harrison Park and the boy's neighborhood. Authorities are planning more searches, but Davidson did not say where.

Although people want to start search parties, Davidson said the department has adequate resources to search. He said the best thing people can do is submit tips by calling (316) 383-4661.

RELATIVE SAYS SHE SAW SIGNS OF ABUSE BEFORE BOY'S DISAPPEARANCE

Lucas' great-aunt Sally Rasmussen, who lives in New Mexico, told ABC News that she saw marks on the boy's arms and on his cheek in a photo she saw of him last May.

Rasmussen, who said she's worked at-risk youth before, said she is familiar with the possible signs of abuse and reported the marks to Kansas Child Protective Services.

Rasmussen said relatives grew more concerned when Lucas and his father, Johnathan Hernandez, visited New Mexico in November. She said they told her they saw more signs of abuse and reported them to authorities in New Mexico.
However, Rasmussen does not believe Lucas' father hurt his son.

"He loves his son dearly!" Rasmussen wrote in a Facebook message to ABC News.

She added that she believes Hernandez, who often travels out of state for work, was out of town working when Lucas disappeared. According to police, Lucas' stepmother told investigators she last saw him in his bedroom just before she took a shower and fell asleep. Police were called to the home about three hours later.

The New Mexico Children, Youth, and Families Department told ABC News that its cases are confidential and did not confirm whether it has an open case involving Lucas.

The Kansas Department for Children and Families, of which Child Protective Services is a part, said it couldn't share any information on its cases either but expressed worry for Lucas.

"We share the public's concern regarding Lucas Hernandez," Theresa Freed, communications director for Kansas DCF, said in a statement to ABC News. "In the event the agency has information, we will share it with law enforcement, assisting them as requested."
Wichita police confirmed in a media briefing Monday that they have had contact with the family before, but did not elaborate on the nature of that contact.

Authorities said they have as many as 100 officers working the case and have searched the Hernandez home as well as Wichita's Chisholm Trail Park, Grove Park and Harrison Park using horses, dogs and drones, but have found no sign of Lucas.

At a prayer vigil on Monday night, Lucas' father told ABC affiliate KAKE he was thankful for the community's help.

"I think it's good to see people in this community treating Lucas like he's their child," Hernandez said. "This is a serious thing and we want him home."

The family is cooperating with the investigation, authorities said.

ABC News has reached out to other relatives of Lucas, but did not immediately receive a response.

Mom of missing kids appeared in court; Husband could testify in case

Mom of missing kids due in court; Husband could testify in case 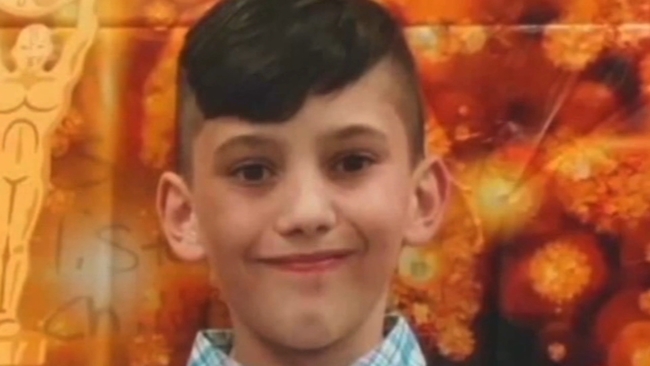