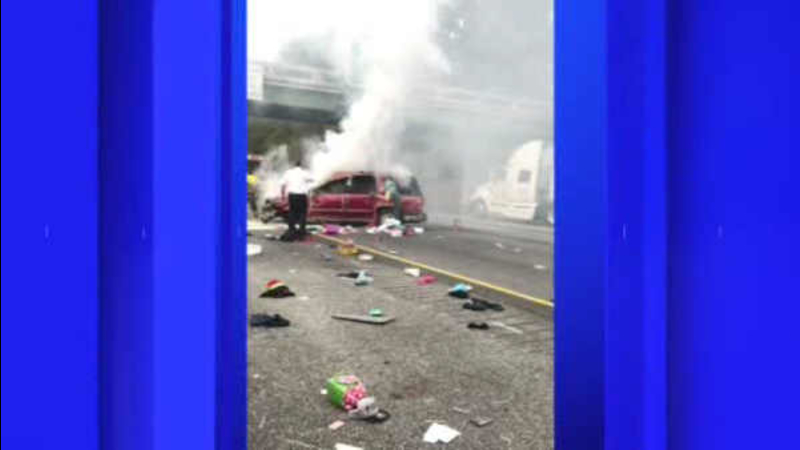 UPPER WEST SIDE, Manhattan (WABC) -- A dramatic rescue was caught on camera, as an off-duty FDNY firefighter saved a man from a burning car.

He told Eyewitness News he and his wife just happened to pass the fiery crash in Georgia while they were on vacation, and he knew he had to act fast.

With a car up in smoke and a man trapped inside, it was a chilling scene in Georgia on I-95, that could have been deadly if not for FDNY Captain Ciro Napolitano.

"My wife started yelling, she saw smoke, a large plume of smoke over the two or three cars in front of us," said Napolitano.

The couple were celebrating their 31st anniversary when they stumbled on the accident scene.

With no first responders in sight, Napolitano, a 30-year veteran, did what he was trained to do.

"Ran out like 10 feet in front, saw what was going on, went to the back of the car because I keep a crowbar and some gloves back there," he said.

With the car about to combust, Napolitano had to work fast to get the man out.

"It was a bad trauma. He was bleeding from the head - his legs were pinned under the dashboard and steering wheel," he said. "Eventually we got him free."

His wife Antoinetta is the one who shot the cellphone video. She says to see what her husband does first-hand was both frightening and surreal.

"I'm very proud of him but at the same time I was very scared for him," she said. "He's going in and out of this car, it's lighting up all the time, the smoke. But he's a first responder..nobody would've walked away from that."

Wednesday, as the Brooklyn native's family paid him a visit at his Upper West Side firehouse, he reflected on what touched him the most.

"I never had it happen before, the mother called me the next day and she couldn't stop thanking me that I had saved her son, she told me I was an angel," he said "I told her ma'am I'm not angel. I only did what my heart told me to do and what i was trained to do."

Napolitano's own mother says she knows her son is a hero, but she believes something greater is keeping him safe.

"I have it in my head that he has an angel watching him," said Fran Napolitano.