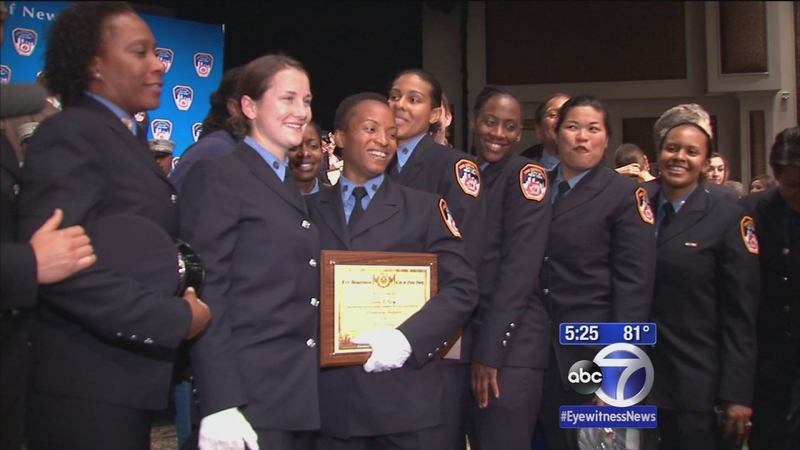 EAST NEW YORK (WABC) --
It was a big day for the FDNY, as the number of female firefighters grew by ten percent.

Four women graduated as probationary firefighters, out of a class of nearly 100.

For the first time in three years, New York graduated new firefighters, and with it all the pomp and circumstance that befits the Bravest.

"This is a class that absolutely looks like New York City and that is a beautiful thing. You represent all of New York City ant that is taking us forward," said Mayor Bill de Blasio.

That is true except for the fact that women are under-represented: 286 probationary firefighters in this group, but only four are women.

Charlotte Shannon, whose father is a firefighter, Giselle King of Brooklyn, and Antoinette Proctor and Vanessa Schoeing, both military veterans.

Schoeing says the other women in her class helped her get through the 18-week program.

"When we were in the lowest of lows and toughest of tough situations we all came out together, and here we are today representing the 41 women in this department which I am extremely proud of," she said.

"In the past 32 years, there have been a lot of barriers for women, a few things like bathroom facilities, men who never worked with women before. But now the more women we get on the job, the more that will change," said Sarinya Srisakul, president of the United Women Firefighters.

And while four female graduates is a step in the right direction, New York still has the largest gender disparity among major metropolitan departments in the country.

But these women may very well be the face of change.