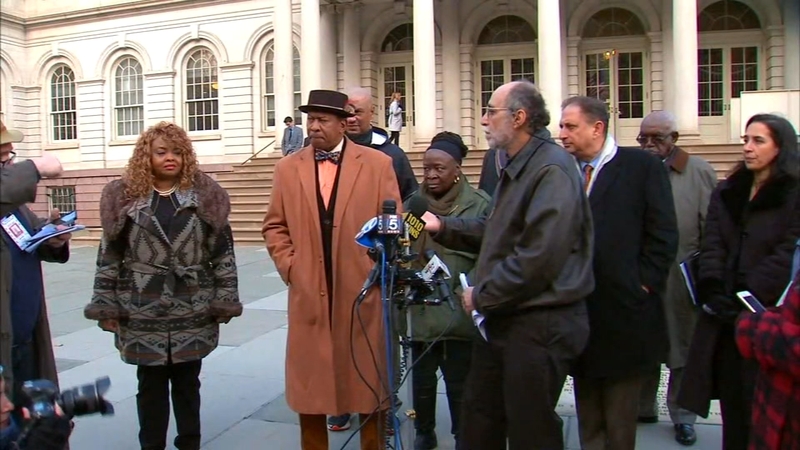 NEW YORK (WABC) -- There are allegations of race discrimination at the FDNY.

A group of African American workers have filed a lawsuit claiming they were denied promotions and equal pay.

Stephanie Thomas has been with the FDNY for nearly 30 years as a computer specialist and says, unlike others, she has never received any discretionary raises and has never even gotten a single promotion.

"I've watched white females come in the door, they are given the opportunity to go up the ranks, to be managers, and I'm not," Thomas said.

Thomas is one of seven FDNY civilian employees now filing a federal class action lawsuit against the department, claiming that for years, even decades, the FDNY has discriminated against blacks when it comes to hiring, promotions and salary.

"We are on a mission to bring about cultural change at the FDNY," said Cyrus Mehri, attorney.

The FDNY has been plagued by accusations of racism for many years and just three years ago, a $100 million settlement was reached between the city and a black firefighters' group that had alleged discrimination.

"This administration has a duty to address this," said Jumaane Williams, NYC Council Member.

Supporters of this latest effort say even that massive payout has done little to end systemic discrimination inside the department.

On the steps of City Hall Wednesday, supporters of the class action suit say the FDNY and City Hall have failed to help solve the problem, leaving them no choice but to head to court.

They want the court to appoint an outside monitor and require the department to equalize salaries, upgrade human resource policies and craft a plan to hire more African Americans.

The plaintiffs in this case have hired lawyers who work for firms that have won some big employment discrimination cases in the past, including some against major companies like Texaco and Coca-Cola.

The FDNY released a statement after Eyewitness News' story aired saying,
"The Department in recent years has demonstrated a commitment to improved diversity and inclusion unlike at any time in our history, including: a diverse leadership team, with more women and people of color than ever before; dozens of historic reforms and positive changes, including to the hiring process at all levels; complete overhaul of the EEO office, including appointing a new commissioner; surveys of the civilian workforce to identify needed changes and improvements; D&I training for all employees; and the most open and transparent relationship the fraternal organizations have ever had with leadership."
Report a correction or typo
Related topics:
new york cityracial profilingfdnydiscriminationracismlawsuit
Copyright © 2022 WABC-TV. All Rights Reserved.
TOP STORIES
Winter Storm Update: Nor'easter hits the NYC area
How much snow in NYC, Tri-State area
NY battered by high winds, blanketed in heavy snow from nor'easter
Winter nor'easter: LIRR suspended, other mass transit info
'This is a big one': Murphy declares NJ state of emergency
Winter hurricane? What is a 'bomb cyclone' or 'bombogenesis'?
Parts of Connecticut could get 2 feet of snow, Gov. Lamont warns
Show More
Share weather photos and videos here
AccuWeather Alert: Heavy snow, wind
Joni Mitchell joining Neil Young in protest over Spotify
3 arrested in shooting death of innocent honor student in New Jersey
'I can't believe I'm alive': Man shoved onto subway tracks speaks out
More TOP STORIES News