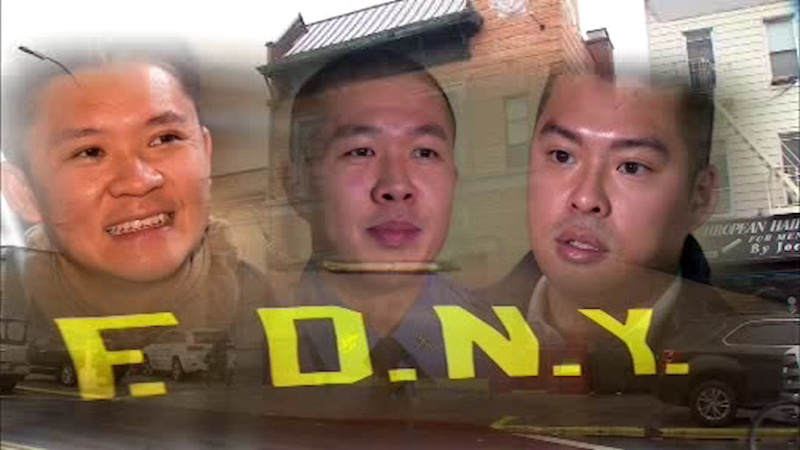 NEW YORK (WABC) -- The FDNY is stepping up their recruitment efforts with a new campaign.

It features four active firefighters who also serve as recruiters for the department.

The FDNY is particularly focused on reaching women and minorities, like Asian Americans who represent less than 2% of the FDNY.

Firefighter Chi Ho Li is Asian-American and that is a rarity in the FDNY. He is one of New York's Bravest, assigned to Fire Engine 243 in Bath Beach, Brooklyn.

"I thought I would do engineering," he said.

For EMT Billy Chen it is a similar story.

He was born and raised in Williamsburg. He too admits this career wasn't what he initially had in mind.

Perhaps it's why there are so few faces like theirs in the FDNY.

In fact, only 1.3% of firefighters are Asian-American.

"When I first came into the department 11 years ago, there wasn't anyone that looked like me," said David Lin, FDNY recruiter.

Lin was at a senior center in Bensonhurst translating a fire safety class, which doubles as an opportunity.

No, he's not recruiting the elderly.

"They'll talk to their kids and their grandkids, and they'll say, 'Hey you know what I saw today? I had the fire department gave me fire safety education and they also spoke to me about these great careers,'" Lin said.

In this community, elders have a major influence.

Three years ago the city settled a $98 million lawsuit alleging the FDNY was discriminating against minority applicants.

The commissioner says this is a different FDNY.

"Because we had such an interest and so many people wanted to become firefighters, we felt years ago there was no need to recruit. But there is, it's powerful for us to reflect the people we serve," said Daniel Nigro, FDNY Commissioner.

But for Li, Lin and Chen maybe before fighting that fire was that first battle with their

"She was pretty surprised," Chen said.

"What are you doing in the fire department?" Lin said.

What won their parents over? What made their families proud?