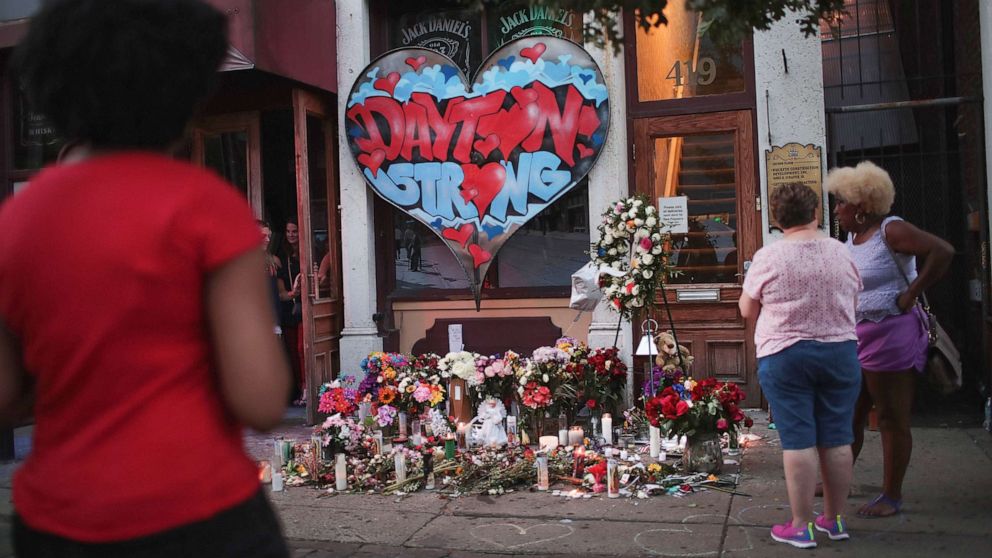 ABCNews
By JULIA JACOBO
Federal charges have been filed against a friend of the gunman who killed nine people in Dayton, Ohio, authorities say.

Ethan Kollie, 24, allegedly lied on federal firearms forms to purchase his own firearm as well as body armor, 100-round drum magazine and unregulated accessory for an AR-15 weapon that gunman Connor Betts used during the Aug. 4 shooting, according to a criminal complaint filed in the Southern District of Ohio.

Hours after the shooting, special agents with the FBI and ATF interviewed Kollie at his home in Kettering, Ohio, after he indicated that he had purchased the items for Betts, U.S. Attorney Benjamin Glassman told reporters at a press conference Monday.

During the course of the initial interview, agents "observed in plain sight" what appeared to be a bong and a pistol and smelled marijuana, Glassman said.

Kollie was interviewed again on Thursday at his place of work, where he allegedly admitted to having done "hard drugs" with Connor as well as marijuana between 2014 and 2015. When agents asked how often he used drugs, he said he had smoked marijuana every day for the past 10 years since he was 14, according to the criminal complaint.

ATF agents later obtained the Form 4473 Kollie filled out to purchase the pistol they observed at his home.

When a search warrant was executed at his home, Kollie allegedly admitted to ingesting psychedelic mushrooms and growing them in his home. A pistol, a clear glass bong, a bong and mushrooms were taken from his home and a small bag of marijuana and a revolver were removed, Glassman said.

He also allegedly stated that he "falsely" indicated on the firearms forms that he was not a user of illegal drugs, saying that he did so because he knew if he answered truthfully he would not receive the firearm, Glassman said.

A person who unlawfully uses controlled substances cannot possess a firearm, Glassman said, adding that his office "vigorously" prosecutes anyone who falsifies Form 4473.

Kollie allegedly stated that he purchased and stored the items for Betts at his home to hide them from Betts' parents, Glassman said, adding that in May, Kollie and Betts assembled the upper receiver for the AR-15 in Kollie's home, and a couple of weeks after that, Kollie recalled Betts picking up the magazine drum and body armor after they arrived.

Kollie was charged with possession of a firearm by a person who is an unlawful user of or addicted to any controlled substance and with making false statements or representations, according to the criminal complaint. He was arrested and made his initial appearance in court on Friday, Glassman said. He will appear in a detention hearing on Wednesday.

He could face up a maximum of 15 years in prison if prosecuted, Glassman said. It is unclear if he has retained an attorney.

Betts, 24, was killed by law enforcement during the shooting.

Ethan Kollie's attorney, Nicholas Gounaris, released a statement on Tuesday saying Gounaris was "as shocked and surprised as everyone else" that Betts was suspected of being the shooter.

"Like everyone else, we watched the press conference held by the United States Attorney. Although we will not discuss the two pending criminal charges against our client, we do want to respond to comments made during the press conference," the statement said.

"Prior to his arrest on August 9th, Mr. Kollie participated in three separate interviews with federal authorities in order to provide helpful information to aid investigators. He does not deny his friendship with Connor Betts and he was as shocked and surprised as everyone else that Mr. Betts committed the violent and senseless massacre in the Oregon District. We appreciate the United States Attorney stating that there was no indication or evidence that Mr. Kollie knew that he was assisting Betts in the shooting," the statement continued.

Betts allegedly showed signs of extreme misogyny before the shooting, officials briefed on the investigation told ABC News, and he had previously expressed suicidal thoughts and had a fascination with violence, his ex-girlfriend told ABC News.

Betts had never been charged with any sort of domestic violence despite allegations made by a former acquaintance who allegedly saw him choke a girl he was dating as a teen. Had he been charged, it would have prevented him from obtaining a gun.

Betts also allegedly made a "rape list" of female classmates he wanted to sexually assault as well as a "hit list" that was later found in a school bathroom, The Associated Press reported.