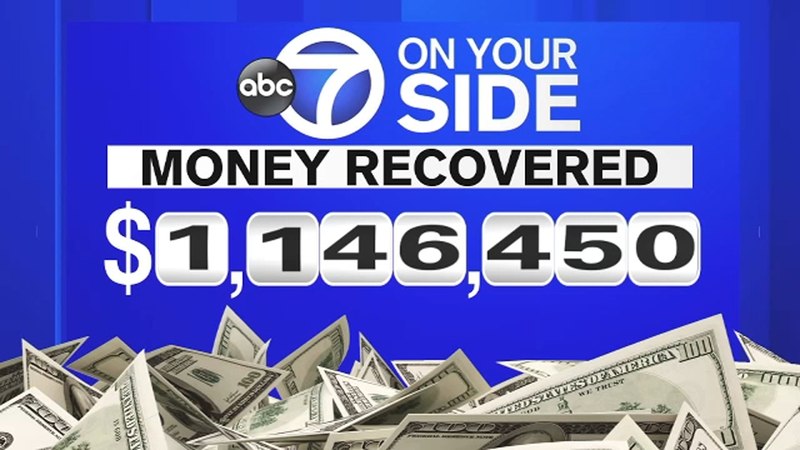 What a year it's been turning your emails and calls for help into cash back in your pockets. But there were some standouts. So we pared them down to just seven of the most poignant and pressing success stories from 2018.

From a rogue reverend confronted outside court to venting frustrations to a mystery landlord over the phone, it's been a banner year for us to run down your refunds.

First up from our Top 7 stories of 2018, a "monumental mix-up." After the tragic death of Mary Jones' son, she saved up and paid $2,000 for his gravestone. But the company stalled instead of installed, leaving Mary waiting for more than a year.

"I just feel he preyed on an older person," said Mary's daughter, Patricia McCoy. But after our repeated calls and emails, the company finally delivered. Her son's lasting tribute was finally complete.

Leslie Cedillo was also grieving. Her husband was killed in an early morning hit-and-run. Compounding her grief, her husband's car was impounded as part of the criminal investigation. But the monthly lease bills kept coming -- even though the finance company could "terminate the lease."

But after we got involved, the lease company ended the lease, saving her $16,008.

"I don't think they would've done it if it weren't for 7 On Your Side," Cedillo said.

Next, persistence pays off. We tracked down rogue Rev. Robert Hester for six years after he bounced checks to a local furniture store.

But, after six years and many court appearances later, the clergyman finally coughed up the cash.

"We are finally whole, thank you 7 On Your Side," said Larry Seligman.

"It's been a nightmare what I've been living." That's because Barbara Baez gave more than a $3,000 down payment to rent an apartment to ex-con Shahab Kahn.

The apartment was never available. Kahn promised a refund, but never delivered.

She was going to move in with her newborn baby. But she's been sleeping on a couch ever since.

After 7 On Your Side dressed him down, he finally agreed to meet in person. Explaining a bank mix-up delayed payback, he came through with $3,000. And we surprised the couple.

The very next day, Kahn was arrested for allegedly robbing others of rental deposits. He's due in court soon.

"So many people are getting taken by this." After getting sold fake tickets to the Broadway smash "Dear Evan Hansen," we put scam victim Blair Russell in touch with the head of NYPD's fraud department.

As a result of our tip, NYPD say they arrested nine individuals, starting with the runner who police say sold the worthless tickets to Blair. That led to the police smashing a multi-state, multi-million dollar fake ticket operation.

"Without you guys I don't know if the police would've really put their hand in and dug in as deep as they have now," said Russell.

But the most poignant problems? First a family still trying to get into their home five years after Sandy.

"It's not just losing your home, it's losing everything you've worked for the last five years," said homeowner and Sandy victim, Anita Olivio.

The Olivio family's home pushed to the brink of foreclosure even after the state of New Jersey granted the family a reprieve from mortgage bills.

We called their mortgage service company, who apologized, and brought their house (worth $367,000) back from the brink.

"Without you guys our house would be in foreclosure," said Anita.

And lastly, our two youngest in need. Twins Waverly and Lorelei's mom lost a battle with cancer -- leaving them and their dad behind to cope.

They were supposed to get their mom's SSA survivor benefits. But even after giving in paperwork the benefits didn't come.

But after our calls - the Social Security Administration apologized and quickly got a check for $20,000. But it's just the beginning of the benefits. By their 18th birthday, the twins will have received more than $613,224 they're entitled to.

So how much do all these refunds and restitution amount to? After we got out our calculator it adds up to $1,146,450. This marks our fifth consecutive year helping get back more than a million dollars of your money. It represents more than a million reasons for us to be thankful. Happy New Year to all -- see you in January!

If using the app, click here to send us a news tip
Report a correction or typo
Related topics:
personal financenew york cityrefund7 on your sidescam
Copyright © 2021 WABC-TV. All Rights Reserved.
7 ON YOUR SIDE
Warning: Don't fall for scam involving bank/Zelle cash transfer
NJ storage customers will be allowed in their Ida-flooded units
Giants legend calls 7 On Your Side to help tackle storage frustration
Renters outraged storage unit disposing belongings after Ida flooding
TOP STORIES
2 adults, 3 kids rushed to hospital in NYC carbon monoxide incident
Elderly man found dead after SWAT officers respond to NJ home
Woman forced to live in sewage-flooded apartment for nearly a week
NYC mayoral candidates spar on bike safety, lanes
Plane erupts in flames after crashing in Texas; 21 survive
Subway crime jumps, riders urged to stay alert
Warning: Don't fall for scam involving bank/Zelle cash transfer
Show More
Mom living with metastatic breast cancer shares struggles of disease
Hochul pushes for school vaccination sites ahead of approval for kids
Community garden at NJ hospital renamed after longtime chef
Facial recognition is everywhere. Here's what to know
4-year-old survives fall off 70-foot cliff while hiking with parents
More TOP STORIES News
Send us your questions, issues, and story ideas to Nina by filling out the form above, by emailing 7OnYourSideNina@abc.com, or contact Nina on her Facebook page or tweet her at Twitter @7OnYourSideNY! You can also call the 7 On Your Side Hotline at 917-260-7697.