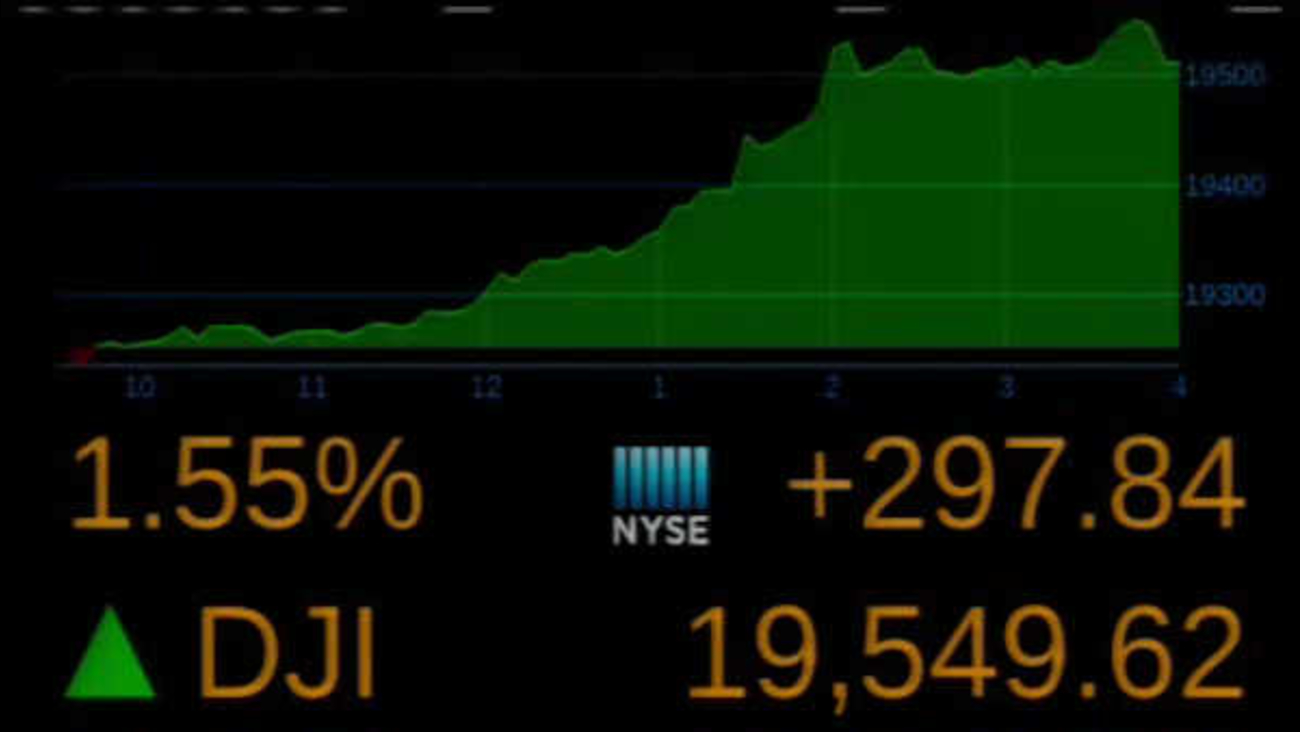 NEW YORK -- The Dow Jones industrial average and Standard & Poor's 500 indexes soared to their biggest gains since the presidential election on Wednesday and set all-time highs. Investors bought stocks that do well in times of faster economic growth, like technology and industrial companies, but they also snapped up stocks that pay large dividends.

Stocks moved steadily higher throughout the day after a mixed open. Phone and real estate companies made the largest gains, but the rally moved into high gear in the afternoon, as airlines, railroads and trucking companies soared.

The transportation sector reached an all-time high for the first time in two years. Julian Emanuel, an equity strategist for UBS, said investors were pleased to see that record because they see it as a sign businesses will start spending more, which would bolster economic growth.

"The consumer has really been the engine of the economy," he said. "The missing piece has been the corporate side, the industrial side."

U.S. government bond prices rose, sending yields lower. The yield on the 10-year Treasury note fell to 2.34 percent from 2.39 percent. Bond yields have risen sharply since the summer but have slipped in the last few days.

The lower bond yields have helped stocks that are seen as bond substitutes, like real estate investment trusts. Their big dividends are attractive to investors who want income, so when bond yields fall, investors often turn to those stocks. Industrial real estate company Prologis rose $1.62, or 3.2 percent, to $52.32 and Verizon picked up $1.02, or 2 percent, to $51.38.

AT&T also jumped as a Senate antitrust panel scrutinized its planned $85.4 billion purchase of Time Warner, the parent of HBO. Legislators asked if the deal would improve competition and reduce prices for consumers, as the companies say it will. AT&T gained $1.10, or 2.8 percent, to $40.45 and Time Warner edged up 8 cents to $93.98.

In an interview with Time magazine, which named him Person of the Year, the president-elect said he wants to reduce drug prices. He did not say how his administration plans to do that. Democratic nominee Hillary Clinton campaigned on reducing drug prices, and drug company stocks had rallied since the election as investors felt that was less likely to happen under Trump.

The Nasdaq biotechnology index tumbled 2.9 percent, as those companies make costly medications and might stand to lose the most under tighter price regulations. Amgen lost $3.92, or 2.7 percent, to $141.19 and Vertex Pharmaceuticals sank $2.80, or 3.6 percent, to $75.32.

Abbott Laboratories moved to terminate its purchase of diagnostic test maker Alere. Abbott agreed to buy Alere in February for about $5.8 billion, or $56 per share. But since then, Alere has recalled a key monitoring device and delayed a financial statement, and it's being investigated over its overseas business. Alere said Abbott's lawsuit is without merit.

European stock indexes jumped as investors anticipated that the European Central Bank will extend its bond-buying stimulus program Thursday. The stimulus is designed to boost growth and inflation. European stock indexes climbed. Germany's DAX gained 2 percent and the FTSE 100 in Britain rose 1.8 percent. The CAC 40 of France picked up 1.4 percent.