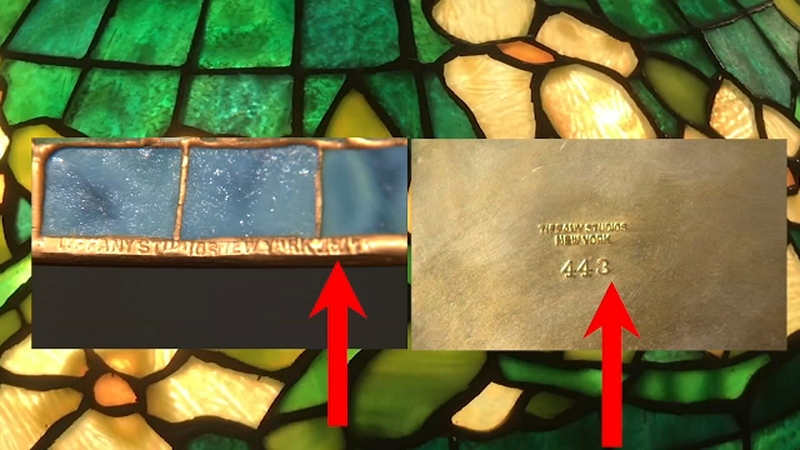 PENNINGTON, New Jersey (WABC) -- There are not a lot of real Tiffany lamps in the world - production at Tiffany Studios in Corona, Queens, stopped after a fire in 1928.

Nowadays, the antique lamps can fetch up to $4 million. That is why when a Harlem man saw a "vintage" Tiffany lamp being auctioned online for just $20,000-$30,000, he thought it was a bargain.

Antiques dealer Litin Su assured 7 On Your Side several times that the green lamp was genuine Tiffany.

7 On Your Side then went to Mr. Su's store in Pennington, New Jersey, to see the lamp he labeled "Vintage Tiffany Studios Designer Table Lamp," and put out for bid on a live auction website with an estimated worth of $20,000 - $30,000.

Geoffrey Greene bought the lamp online, after asking the seller if it was genuine Tiffany.

Greene won the bid for $8,500. After the service charge, the grand total was more than $10,000. However, Greene says his bargain was a bust.

"I went to the store and saw it and said 'this was not genuine it looked new,'" Greene said, "I told him this isn't real, and I don't to buy it and want my money back. He said no refunds."

The seller told Greene in writing he would give him a refund if he could prove it was not real.

Enter Ben Macklowe, President of Macklowe Gallery, one of the foremost experts on Tiffany lamps. He has appraised Tiffany pieces for museums and collectors all over the world to determine authenticity.
"The signature on the base not their stamp," pointed out Macklowe. "All the lettering is wrong - there's nothing that's right about this lamp."

Macklowe concluded the lamp sold by Pennington Gallery was "without a shadow of a doubt is not an authentic Tiffany lamp."

Mr. Su says he's still trying to sell the lamp that Greene doesn't want. He would not provide a certificate of authenticity, said he doesn't believe the expert.

The online auctioneer told 7 On Your Side it never received any money from the transaction. It also banned Mr. Su from listing on its site.

Mr. Su offered to pay Greene a partial refund of $6,500 over a three-month period, but Greene rejected that offer - he will pursue a full refund in court.

The big takeaway: Before buying an antique - see it in person first. Greene mailed his check before ever getting to examine the lamp with his own eyes.

Next, it is important to ask for for a certificate of authenticity. The buyer said he only asked Mr. Su over the phone if the item was genuine, and took his word for it. He made two big mistakes that cost him thousands.