2 in critical condition after fire tears through building in Queens 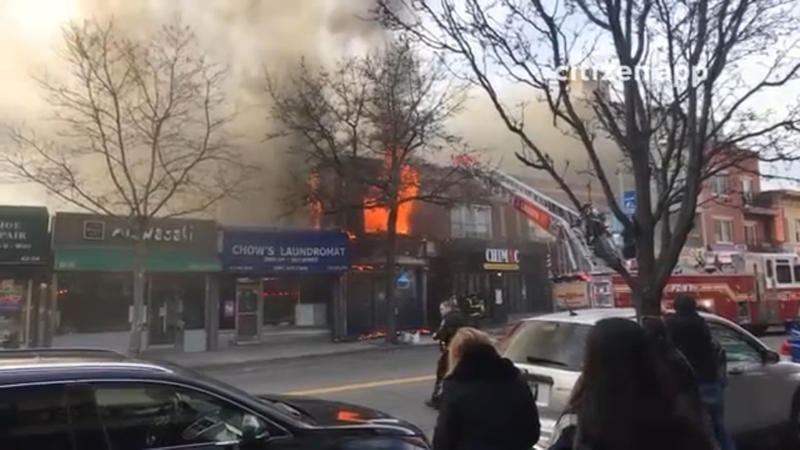 2 in critical condition after fire tears through building in Queens

BAYSIDE, Queens (WABC) -- Two people are in critical condition after a fire tore through a building in Queens Tuesday afternoon.

The flames broke out just after 3 p.m. in a second-floor apartment above an ice cream shop on Bell Boulevard in Bayside.

The fire was extinguished in a matter of minutes, but the damage left behind will last much longer. The flames incinerated one apartment in a row of buildings as others filled with smoke.

"People were kinda frantically going up and down the street asking, is anyone in there?", said eyewitness Steve Lastihenos.

"I was inside with my baby two months old," said resident Lupe Rivas. "I just saw smoke in my house and I opened the door, I saw the fire in the next apartment. I took my baby out and I run."

She and about a dozen others live in neighboring apartments and rushed to evacuate.

But in the apartment where the fire started, a man and a woman couldn't get out on their own. Rescuers found them unconscious and carried them to the street.

"The man, they did chest compressions," said Lastihenos. "They were working on him right on the sidewalk as we stood here for about five minutes. So I kinda got the feeling he was in bad shape and might not make it."

The victims were rushed to separate hospitals with severe burns as the search for clues began.

Fire marshals spent hours trying to figure out a cause for the inferno, which started in and destroyed the upstairs apartment but also did severe damage to the ice cream shop just downstairs, which had been open just a couple of months.

Lastihenos's shoe store has stood a few doors away for four decades. "I started grabbing paperwork from my store, be ready to just run outta here," he said. "Go home hug my kids, check my smoke detectors, and you know and be happy that I'm standing here ok."

The cause and circumstances of the fire remain unclear, and the investigation is ongoing.