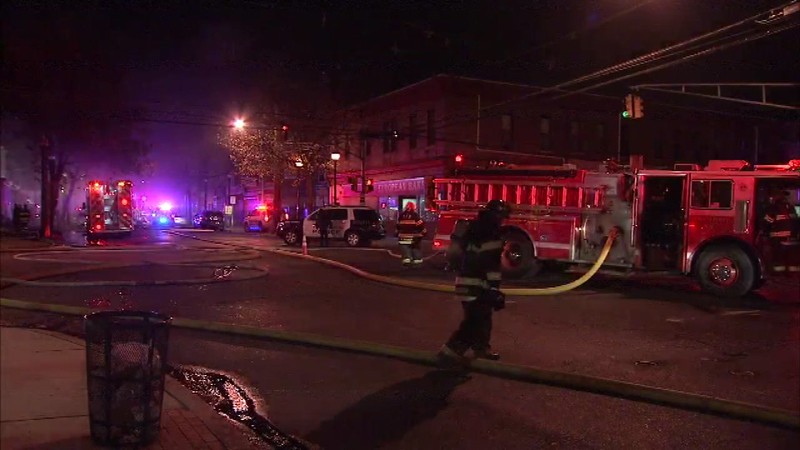 TRENTON, N.J. -- Fanned by whipping winds, a six-alarm fire damaged nine homes, sent two people to the hospital and led to the evacuation of an entire city block in Trenton, New Jersey.

Three homes had collapsed and Action News was told six more were in danger of collapse by the time the blaze was finally declared under control at about 7:15 a.m. Monday, more than four hours after it began.

The blaze was first reported at 3 a.m. in the unit block of Weinberg Place.

Fire officials tell Action News the fire started in one row house on the block and quickly spread.

Flames have now spread to 9 homes in Trenton, 3 have collapsed. At least two people have been injured. pic.twitter.com/yOQoqNDsSn

By the time firefighters arrived, four homes were fully engulfed in flames.

"Just hard to breathe because of the rubber smell," said resident Judy Nettle. "It's just a lot of smoke."

Cars on the block were reportedly also on fire.

The wind certainly didn't help, but fire officials say that the biggest challenge fighting the fire was a series of downed, live wires that delayed them attacking the blaze.

"Electricity and water don't mix," said Deputy Fire Chief Leonard Carmichael. "So because of that, from a safety perspective, we had to pull our firefighters back until PSEG got here to make sure the scene was safe."

Power and gas to the immediate area had to be shut down.

The fire quickly went to three alarms. By 5 a.m. it was at five alarms and by 6 a.m. a sixth alarm was struck.

Trenton firefighters were joined by crews from Mercer County and other neighboring communities.

Two people were taken to the hospital. As of noon, the extent of their injuries was still unclear.

The fire department requested public transit buses be brought in for residents who have been displaced by the fire.

The fire was finally declared under control by 7:15 a.m.

Officials say at least seven people have been displaced. They were being assisted by the Red Cross.

A five-alarm fire has damaged at least eight homes in Trenton, N.J.