Stacey Sager has the latest details.

STAPLETON, Staten Island (WABC) -- A second church in a Staten Island neighborhood has been firebombed in just a matter of days, and police are hoping new surveillance video will help identify a suspect.

The target seems to have been an office window, but the assailant missed. One of bottles wound up on the front lawn, the other bounced against a small awning on the side of the building. The resulting fire caught the eye of a passing ambulance crew, who called for help before the flames could spread.

"We're glad they didn't play quarterback for the Jets," Minister Dale Smith said. "God's grace the damage was minimal, and we're blessed no one got hurt."

"I say God is still good, but we also live in a broken world" Smith said. "This is an opportunity now to reach out to people even more and bring people more together."

It was the same fortunate outcome as another attempted firebombing at a church a 10-minute walk away. St. Paul's Memorial Episcopal Church, which has stood for 146 years, was targeted over the weekend with a Molotov cocktail dropped through an open window.

"If it had landed on the pews, we would have ended up with a massive fire," Rev. Frederick Scraplau said. "We don't have A/C so we leave the windows open to cool off at night."

Police believe the incidents are linked, and officers are now standing guard at both churches as arson and hate crimes task forces search for suspects.

"I think it's just hate," Smith said. "Maybe hate of God, of churches, of worship. Somebody's in pain that's doing this."

So far, there are no arrests in either case, and dozens of clergy from across the island met with police and elected officials Friday to get the get the very latest on the similarities between both crimes.

"We have two churches that were victimized within four days, very close in proximity," said Mark Magrone, of the NYPD Hate Crimes Task Force. "The remnants of the incendiary devices that were recovered were similar in each of the two instances."

Anyone with information is asked to call police, and a $2,500 reward is being offered for information leading to an arrest. 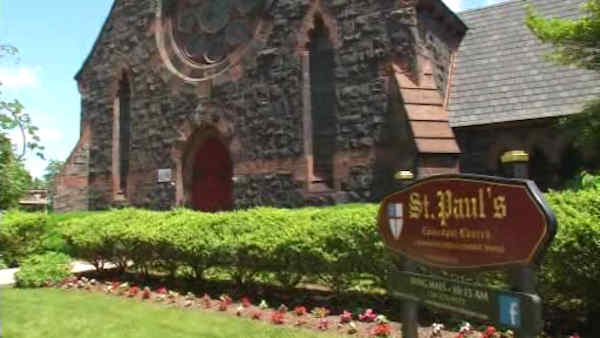