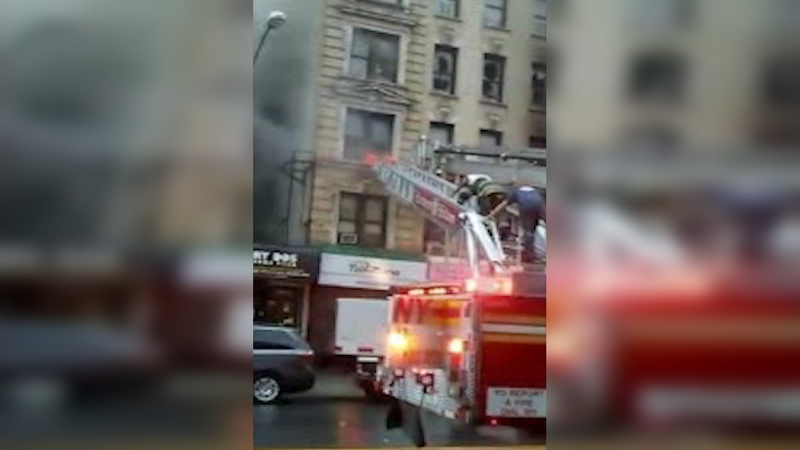 HARLEM, Manhattan (WABC) -- An early-morning fire in a Harlem shop and apartment building injured six people, one seriously, as firefighters rescued residents through windows by ladder.

Firefighters were called around 6:30 a.m. Monday to the 145th Street building.

The fire started in a hardware store and a tower of flames quickly shot up the side of the apartment building.

"It was just out of the blue, you know, we came out and it was a bunch of people screaming and a bunch of smoke, fire, everybody was you know panicking," a neighbor said.

Firefighters managed to knock down the flames fairly easily, but with heavy smoke throughout the building it was still a rush to evacuate.

Cell phone video showed them carrying residents down their ladders, while one man made for a fire escape.

"We were just more worried about the kids, trying to get out of there as fast as we can," said Eddie Baez, an eyewitness.

In all, rescuers pulled 17 children from a dozen different apartments. The building is now condemned.

Among the victims was Mamadou L'Imbaye who'd been sleeping when firefighters banged on his door.

"I am happy. I thank God. (They saved your life) Yeah, my life. Thank you very much," L'Imbaye said.

More than 100 firefighters battled the fire. The Fire Department says four firefighters and two civilians were taken to hospitals, and one civilian suffered serious but non-life-threatening injuries. The rest are described as minor.

The American Red Cross is helping over 50 people affected by the fire.