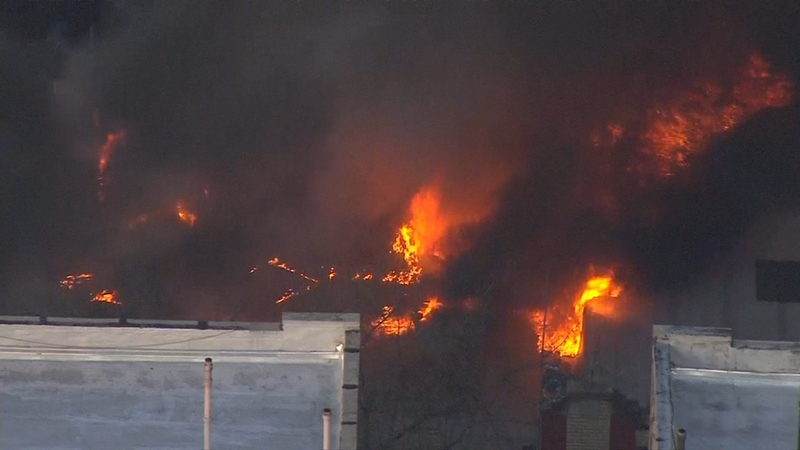 FORDHAM, Bronx (WABC) -- A five-alarm fire burned through a row of stores in the Fordham section of the Bronx early Tuesday.

The fire broke out on East 194th Street just after 5:30 a.m. The FDNY said 250 firefighters with 50 pieces of equipment responded to the scene to fight the massive blaze.

Photos of the fire from the scene

Aerial ladders helped knock down a lot of the visible flames around 6:15 a.m. The fire was finally brought under control hours later.

The fire destroyed seven businesses, including a laundromat, pizza shop, Chinese food restaurant and a barbershop, among others. A neighboring grocery store was saved by firefighters.

"The success here today is that we have no injuries," FDNY Chief of Department James Leonard said. "The bad news is he have a total loss of the building and seven businesses have lost their building, with all the associated people losing their jobs."

The stores that went up in flames had been a fixture in the neighborhood. "This is crazy, all of these stores, I can't believe this," said neighborhood resident Brittaney Jackson. "These stores have been here for years, especially this laundromat, since I was a little girl. This is very shocking."

The fire spread through the common roof shared by the businesses. Because of the early hour, the stores were all closed.

Firefighters are still working to determine in which business the fire started, and also what caused the fire.