Fire burns through two homes in Jamaica, Queens, on Thanksgiving 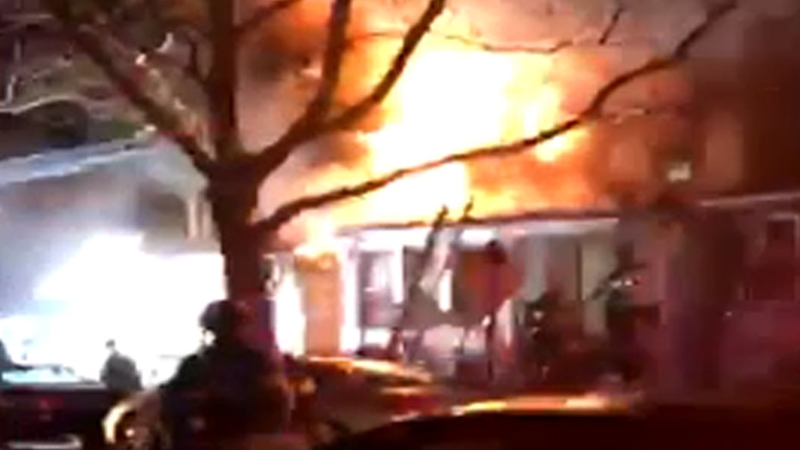 Fire tears through two homes in Jamaica on Thanksgiving

JAMAICA, Queens (WABC) -- A fire broke out inside a home in Queens on Thanksgiving and quickly spread to an adjacent home.

The fire started on the first floor of a two story home before it started to spread.

You could hear electrical lines arcing in video taken by a neighbor just before firefighters arrived.

Two homes on 108th Avenue were fully involved and in all 138 firefighters responded. The fire was under control by 8:30 p.m.

"The occupants were out enjoying Thanksgiving with family in other places," said Joe Woznica, FDNY Assistant Chief. "At this point it's under investigation. It's suspicious."

We know the fire spread from one house to the other. And we know one person was inside one of the homes just before firefighters got to the scene.

"It's the worst Thanksgiving ever," said Destiny Vance, resident.

Vance had just gotten out of the shower, when she heard banging and shouted warnings from outside.

"So I ran out and I see the smoke by the door and I opened the door and came out," Vance said. "If I didn't hear the people banging and yelling that would have been my life."

Firefighters kept the blaze from spreading farther down the row, and as they worked one of the owners returned. Considering the damage, he took the news pretty well.

"Nah, nah, I'm taking it like I have to take it. I can't fall all over the floor like that. I got to stand up straight, I'm a grown man," said Ralph Faison, homeowner.

"They told you it was the house next door, and it caught your house on fire?" Eyewitness News asked.

"That's what they said. It jumped from over there to here," Faison said.

"And how bad is the damage?" Eyewitness News asked.

Within a couple hours, the fire was under control, as owners and neighbors agreed this was a rotten Thanksgiving.

"It's heartbreaking, people have gone out to enjoy the holiday with family and then they get a call to come back because your house is involved in a fire," Woznica said. "When they get here, they see the amount of damage. But the main thing is nobody got hurt."
Report a correction or typo
Related topics:
jamaicanew york cityqueensfirehouse fire
Copyright © 2021 WABC-TV. All Rights Reserved.
More Videos
From CNN Newsource affiliates
TOP STORIES