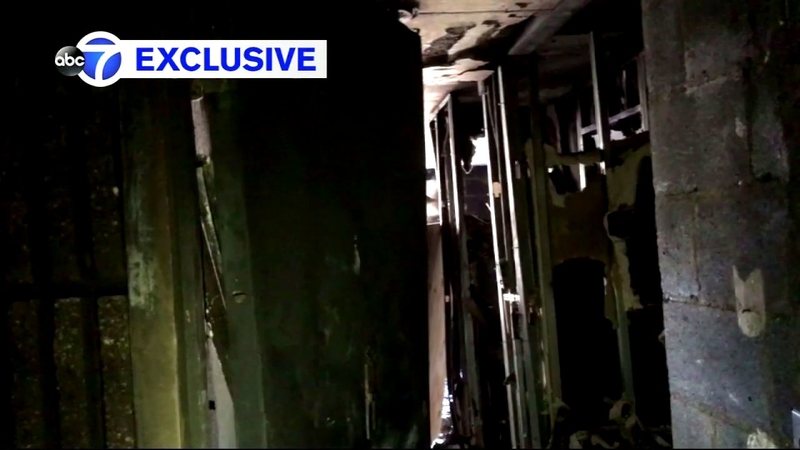 UPPER WEST SIDE, Manhattan (WABC) -- The four-alarm fire on the Upper West Side was accidental, caused by "careless use of an open flame/candle," according to fire officials.

Twenty-four people, including four firefighters and an 8-year-old girl, were hurt, but their injuries are not thought to be life threatening.

The fire broke out around 5 p.m. Thursday at 515 W. 59th St., near 10th Avenue. The building is 33 stories high with more than 465 apartments. Fire officials said it started in a third-floor apartment, where video obtained exclusively by Eyewitness News shows its intensity, and spread heavy smoke to higher floors. It was extinguished just before 7 p.m.

According to a fire official, flame from a candle spread to a bathrobe worn by a woman in her 70s, who was the only person in the apartment. While trying to remove her clothing, she inadvertently spread the fire through her apartment. When she fled, she left the apartment door open, and wind from the windows whipped the flames through the apartment and into the hallway.

"Biggest problem we had was (the) door was left open, and a large amount of fire got out into the hallway and rest of building," FDNY Commander Robert Sakowich said.

Heavy smoke then spread throughout the apartment building, overcoming dozens of residents who had evacuated into hallways and stairwells.

Bhavik Shab who was in his 13th floor apartment initially reacted as many other residents mistakenly did by trying to flee his apartment :

"I come out to see smoke all over," he said. "I just wanted to get out as soon as possible, but I could not because there was smoke in the hallway. No way I could see anything, so I went back into my apartment."

One firefighter was severely burned and taken to the burn unit at New York Presbyterian-Weill Cornell Hospital for treatment, with another three other firefighters also sustaining non-life threatening injuries.
Three victims were children, including a 8-year-old girl who was in cardiac arrest on the 21st floor. She was attempting to evacuate her apartment to the roof and was overcome by smoke in the stairwell. She was revived, likely by members of the Mount Sinai Hospital staff who occupy most of the building, the fire official said.

"She was brought into an apartment by a nurse who administered CPR," Sakowich said. "She should be given credit for helping prior to our members arriving."

The building is used in part to house medical residents and doctors affiliated with Mount Sinai St. Luke's Roosevelt Hospital.

A 1-month-old and a 1-year-old also were being treated. The rest of the hospitalized residents are believed to have been treated and released, most at nearby Roosevelt Hospital.

A spokesman for Mayor Bill de Blasio said he had spoken to the hospitalized, injured firefighter who "was in good spirits." The mayor may visit again Friday.

Leonard warned others that if your apartment is on fire, leave the apartment and make sure to close the door, then call 911. If the fire is not in your apartment but breaks out in your building, he advises sheltering in place and blocking smoke under the doors with towels.
Related topics:
upper west sidenew york cityapartment fire
Copyright © 2022 WABC-TV. All Rights Reserved.
TOP STORIES
Deadly Bronx house explosion caught on camera
AccuWeather Alert: Messy morning
Cardi B offers to pay for funerals of all 17 Bronx fire victims
Starbucks no longer requiring US workers to be vaccinated
Times Square subway shove suspect ordered held without bail
Third teen sentenced in murder of Barnard student Tessa Majors
Rescue captured on bodycam video after 3 break through thin ice
Show More
French actor Gaspard Ulliel dies after ski accident
Pedestrian safety at heart of NYC traffic initiative
Cracker Barrel to pay $9.4M after man was served glass with chemical
New details released in the investigation of Kathleen Durst's murder
Biden, 1 year in, says nation weary from COVID but in a better place
More TOP STORIES News