Fires force residents out of their homes in the Bronx 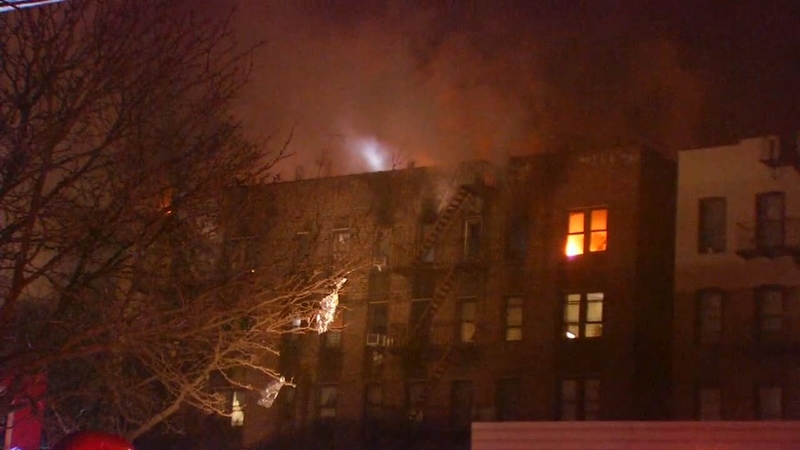 Fires force residents out of their homes in the Bronx

EAST TREMONT, Bronx (WABC) -- Dozens of people were forced out of their homes and into the frigid cold as a result of separate fires in the Bronx Wednesday morning.

In the Norwood section, a fourth-alarm fire broke out at about 4:30 a.m. at an apartment building on Knox Place.

The fire burned on the top floor and through the roof of the building,

About 43 residents were left temporarily homeless -- but later the Department of Buildings issued a full vacate order for that building, leaving 80 residents without a home. A partial vacate order was issued for an adjacent building.

All affected tenants were offered relocation assistance by the American Red Cross.

Many are homeless, two with minor injuries at a 4 alarm fire on Knox in the Bronx. 180 fire crews working the fire. @ABC7NY pic.twitter.com/reiuKSngNZ

Many residents were sleeping when the fire started.

Ebony Hudson woke up with just seconds to escape. "I was forced to leave and abandon my cat," she said.

Some had to run out without even time to grab a coat.

Around the same time, a third-alarm fire ripped through an apartment building on Garden Street in the East Tremont section.

It started on the first floor at about 4 a.m. and spread through the building.

No injuries were reported, but some residents were evacuated.

"Someone came knocking on our door, 'fire, fire', so we just came out," said resident Princess Asante.

An MTA bus will temporarily shelter the residents who were evacuated as a precaution.

Firefighters had to dodge icy patches from where the water from their hoses hit the ground.

More than 300 firefighters were involved in battling the fires, including those called in from other boroughs to help.

"Between the two fires we had units from all different parts of the city," said FDNY Deputy Assistant Chief Thomas Richardson.

A third fire broke out at a laundromat on Decatur Avenue in the Norwood section.