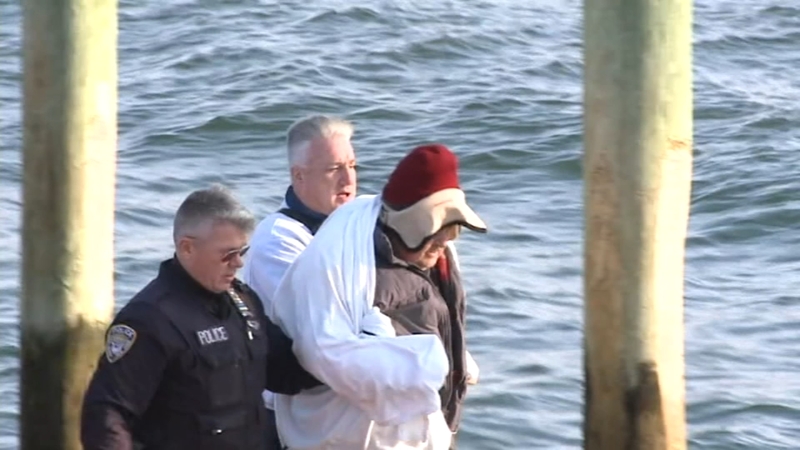 MINEOLA, Long Island (WABC) -- A fisherman is back on solid ground and recovering in the hospital after enduring a cold, wet night on the water.

His boat became stranded near Long Beach, Long Island, and it took rescuers until the morning to bring him back to shore.

After 17 hours outside overnight, this 60-year-old fisherman said about what you'd expect when the Nassau County Marine Bureau reached him on his cell phone.

The man, whose name police did not release, had called a friend, not 911, but that friend had called for help.

The man had been out on Reynolds Channel in Long Beach, near Duck Point since 3 p.m. Tuesday, when his small boat got hung up on the marsh.

He said he was waiting for the high tide, but it came and went.

So Officers Beard, Kevin Shannon and John Kannengeiser were lucky they reached him when they did, because soon after the man stopped answering.

"Problem was he was unresponsive at that time," Officer Shannon said.

"Found the man underneath the bow of his boat there, where he was in total distress," said Commissioner Patrick Ryder, Nassau County Police Department.

"We knew he was in trouble. He was having difficulty breathing and he was shaking uncontrollably," Officer Shannon said.

Thankfully, the fisherman, a Long Beach resident, was taken to the hospital where he spent the day recovering from hypothermia.

His boat remains still tangled in the marsh.

"It's also a warning to all our boaters out there this time of year, it changes quickly, it goes from a beautiful sunny day to a cold evening," Commissioner Ryder said.