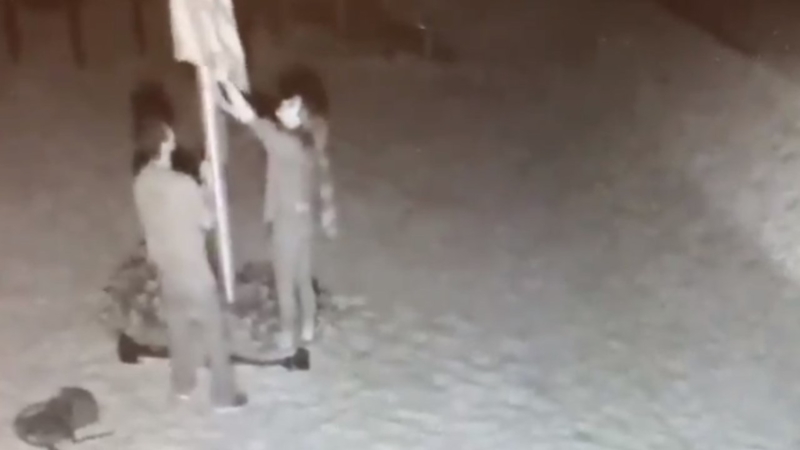 The incidents happened back in August but are sparking new outrage on Veterans Day, and authorities are hoping new pictures and video of the suspects will lead to arrests.

The surveillance video captured the three young people -- two boys and a girl -- desperately trying to get the flags down, climbing on top of each other to get up the pole. They eventually made off with a POW flag and an American flag.

NEW VIDEO: Police are looking for 3 people who stole an American flag and a POW flag from a park on LI Story at 1230 pic.twitter.com/OVswbdLRVx

The POW flag they make off with quite easily, but with the American flag, they had to rip and tear down.

"The investigator involved in this case has exhausted all his investigative avenues," Suffolk County police Lieutenant Christopher Corsino said. "And now, we're appealing to the public to help see if we can identify and subsequently capture the three individuals who committed the act."

John Mutt is the caretaker of the park, and he says the flags were donated by a local resident and that the park was locked at the time. The kids used a side path to gain entrance.

"It's really a disturbing thing," Mutt said. "We really maintain the park for the town of Brookhaven and it's upsetting to see."

It appears that one of the suspects took a selfie during the theft, and all three are facing petit larceny charges.

Still, members of the American Legion in Mastic Beach said they would rather the kids not face charges, but instead meet with members.

"I would like to sit down and talk to them," George Barnes said. "And find out exactly why they did something like that."

"People die for that flag, and that's what we're celebrating today," Mike Kujan added. "The people that served our country."

"If we don't mentor the young folks, they think it's OK to desecrate the American flag," Dickie Lochren said. "And that's not right."