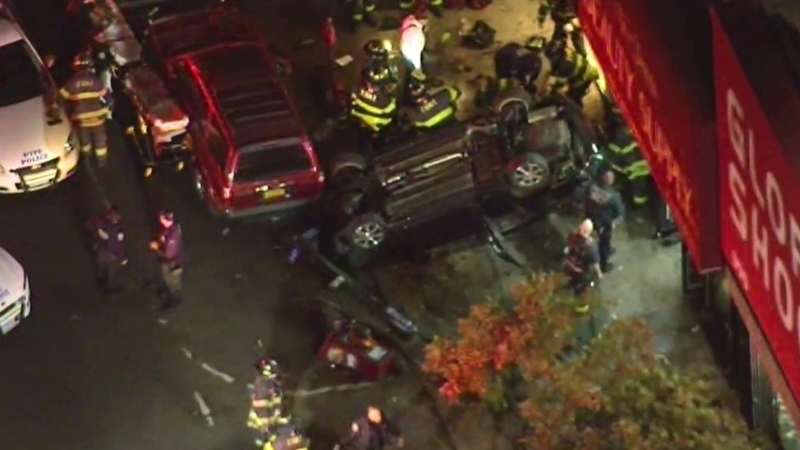 1 pedestrian dead, 3 other people hurt after car flips over onto sidewalk in Flatbush, Brooklyn

FLATBUSH, N.Y. (WABC) -- One man is dead and three other people were hurt after a car flipped over onto the sidewalk in Brooklyn Monday evening.

Police said two cars were involved, with one of the vehicles, a Nissan, appearing to have knocked over a tree that was on the sidewalk and left a trail of debris before it landed upside down.

"Boom, like an explosion," one witness said. "That was really awful."

Surveillance videos from various angles show the horrible accident. The 50-year-old man who died, identified as Kinyeti Charles, is seen innocently talking on his phone. Seconds later, the car, airborne, crashes into him and lands upside down on the sidewalk. Just a few feet behind him, a woman who survived can be seen scrambling into a store. Seconds later, Good Samaritans came racing to help.

Flatbush Avenue was packed with cars and pedestrians when the driver of the Nissan lost control.

Paul Omoregie, 58, was driving and his 3-year-old son. They were taken to the hospital and are expected to survive. He has now been arrested charged with aggravated unlicensed operator and driving without a license.

The 59-year-old woman who was hit by debris and ran into the store was taken to Kings County Hospital with non-life threatening injuries.

Felicia Thomas had just left the area when tragedy struck.

"I was supposed to be buying something out of that store right there," she said. "I'd probably be dead right now. God is good."