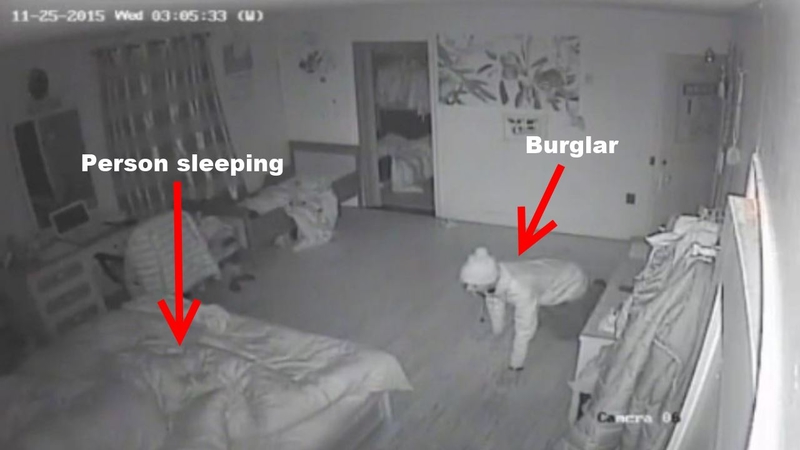 Burglar caught creeping in family's bedroom while they slept in Queens

FLUSHING, Queens (WABC) -- Police are investigating a terrifying home invasion in Queens in which the suspect was caught on camera creeping around the bedroom while the male homeowner slept in his bed.

Camera's outside caught the burglar on the street before he entered the house in Flushing.

The camera inside the home's living room saw him as he entered the house around 2:30 Wednesday morning.

It took nearly half an hour of skulking around the house before the burglar is seen on his hands and knees, with a knife in his mouth, in the homeowner's bedroom.

"They were not sleeping, they had just got to bed, they were still up," said a resident of the home.

One resident didn't want us to show his face, but he says the owner of the home and his wife was still awake.

That surveillance camera outside is for security. The one in the bedroom is actually a baby monitor. The parents use it to keep an eye on the children after the children have gone to bed. There were three kids sleeping in that room. At 2:30 in the morning, the parents were in bed as well and they heard someone moving in the room.

"He thought it might be one of the kids, but he looked to be much bigger than the kids," the resident said.

He is much bigger. Police say the burglar is 6'2" tall and maybe 200 pounds. He was wearing all black, but that ski hat he's wearing has the word "diamond" on it.

The suspect removed a Samsung S6 cell phone from on top of a bedroom dresser.

The owner shouted and the burglar ran away. The whole thing has made residents wonder if they are as safe here as they thought.

"It changed, we have to check all the doors and windows," the resident said.

Police are hoping someone recognizes the man and calls them before he breaks into someone else's home.