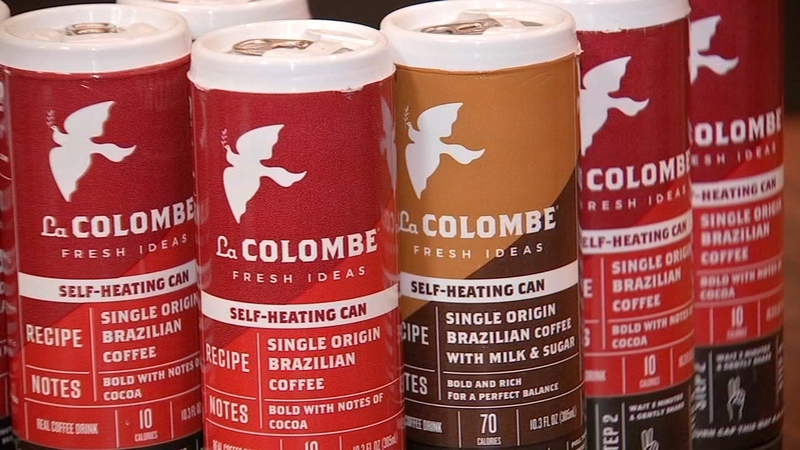 La Colombe introduces coffee in a self-heating can

PHILADELPHIA -- Let us introduce you to hot joe on the go that you can heat up anywhere.

Philadelphia-based La Colombe recently tested out new self-heating cans at its flagship cafe in the Fishtown neighborhood of the city.

The first batch sold out in a matter of days. They have since restocked.

La Colombe CEO and Co-Founder Todd Carmichael explained, "The challenge was to see if we could not liberate the hot coffee from the cafe environment and let it go mobile, where you can have a hot coffee anywhere you are."

Carmichael elaborated that could mean enjoying a cup of La Colombe coffee pulled from your desk drawer at the office or sitting at the top of Mount Rainier.

While the Philadelphia-headquartered company has cafes across the country, the product was available first in Fishtown. The self-heating cans, which are recyclable, will hit their other Philadelphia cafes next week.

The self-heating can plan has been in the works for about five years.

Carmichael has been working with developers at HeatGen to fine-tune how hot the coffee gets and how quickly.

The timing was tricky.

Too fast, and customers may drop their coffee in shock. Too slow, and they wonder if it is working.

But Carmichael believes they found the balance.

The core heats up within two minutes, warming the surrounding beverage.

"So we take aluminum and silica. These are just two minerals, and when they come in contact with each other they rapidly oxidize," Carmichael described.

Carmichael emphasized the product is, "Human safe, dog safe, animal safe, earth safe. The other ones have run into issues, and that's why you don't see them on the market."

So we put it to the test with two Philly customers: Meredith Tamminga of Fishtown and Steven Profetto of the Frankford neighborhood.

Even before she cracked hers open, Tamminga was intrigued.

"I like the idea that I could have a hot coffee in a grab-and-go format," Tamminga remarked.

They each tentatively twisted the bottom caps and wrapped their hands around their respective cans, waiting to see what would happen next.

First all was quiet.

Then you can hear a slight gurgling and feel the difference.

"It was really subtle at first, but now it feels like I'm holding a heater actually. It's weird," laughed Tamminga.

Then it was time for a taste test. Both were impressed with the taste and the warmth.

"That is a hot cup of coffee," Profetto said with approval.

Carmichael expects to grow the options.

"Ultimately, I think you will see a lot more coming like mochas, lattes. We'll play with the entire menu," Carmichael stated.