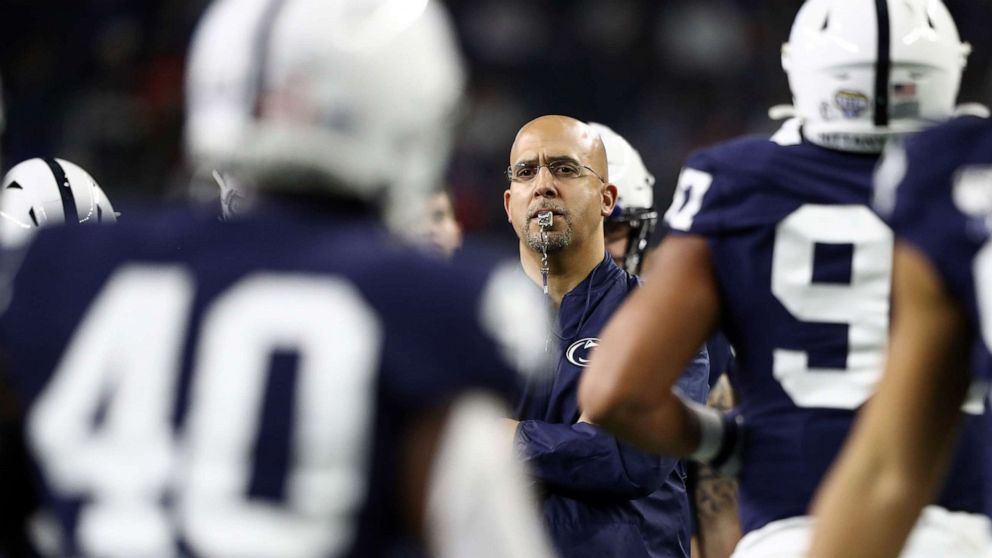 ABCNews
By ELLA TORRES
A former Penn State football player is suing the university, his old coach and a current player for what he described as an orchestrated campaign of hazing that included sexual harassment, threats and physical punishment, according to a lawsuit.

In some of the alleged instances, the player who is being sued, Damion Barber, and three others named in the suit made references to disgraced former Penn State assistant football coach Jerry Sandusky.

The players warned Isaiah Humphries, the plaintiff, and other younger teammates, "I am going to Sandusky you," according to the lawsuit, which was filed Monday.

Sandusky was convicted of 45 counts of child sexual abuse in 2012.

Humphries also claims in the suit that his former teammates also said they were going to make the underclassmen "their b---- because this is a prison," according to the lawsuit, filed in U.S. Middle District Court.

The alleged physical and sexual acts included simulated intercourse, placing genitals on the face of underclassmen and restraining players while they were naked, the lawsuit claims. Humphries is seeking unspecified financial damages for the harm he said it caused to his physical and mental health, and to his football career.

In a statement to ABC News, Penn State said the university "has established processes in place for responding to claims of potential misconduct" and followed the appropriate steps after learning of the hazing allegations, including forwarding their findings to the Office of the Centre County District Attorney, which declined to pursue charges.

The players named in the suit -- defensive tackle Barber, linebacker Micah Parsons, defensive end Yetur Gross-Matos and linebacker Jesse Luketa -- allegedly "orchestrated, participated in, directed and/or facilitated a campaign to harass and haze lower classmen members of the Penn State football team," the lawsuit claims. The four also specifically targeted Humphries "with a common purpose to haze, harass, assault and batter and retaliate" against him.

Humphries and his father, Leonard, a former Penn State football player who also played in the NFL, reported the hazing to head coach James Franklin.

Members of the coaching staff also allegedly saw firsthand the harassment and hazing, however, neither Franklin nor other coaches took "substantive action" to prevent it. No coaches reported the incidents, according to the lawsuit.

Penn State claimed in its statement that the school did not learn of any information that backed the allegations against Franklin or claims of hazing against anyone in general.

Humphries alleges he was subjected to retaliation for reporting the behavior.

He was required to participate in athletic drills that were "designed to ensure [his] failure" and then used against him as evidence for why he couldn't play, the lawsuit states. Humphries is also said to have been denied proper medical care by the team to "manage diagnosed conditions of anxiety and narcolepsy."

At one point, in the wake of Humphries' reporting, Luketa told him that if he ever visited "his city" in Canada, he'd make sure Humphries was gunned down upon arrival, the lawsuit claims.

The university's Office of Sexual Misconduct Prevention and Response received word of the alleged hazing through an anonymous complaint and launched an investigation in May 2019, according to Penn State officials.

The investigation concluded Barber "committed prohibited behavior" and was sanctioned, however it was not immediately clear what those sanctions were.

Barber was suspended from a game in September 2019, but Penn State declined to comment on that disciplinary action, saying it's a confidential matter under federal law.

Barber appeared in two games during the 2019 season, according to his online player profile.

Franklin, Barber, Parsons, Gross-Matos and Luketa did not immediately respond to requests for comment from ABC News.

Humphries, who attended Penn State from January to December 2018, eventually transferred to the University of California, Berkeley.

"What this young man is doing is courageous," said Steven Marino, Humphries' attorney. "He didn't leave Penn State because he wanted to. He didn't leave because he couldn't compete at the D1 level. He left Penn State because of hazing and harassment and abuse."
Report a correction or typo
Related topics:
abc newsnational
Copyright © 2020 ABC News Internet Ventures.
More Videos
From CNN Newsource affiliates
TOP STORIES