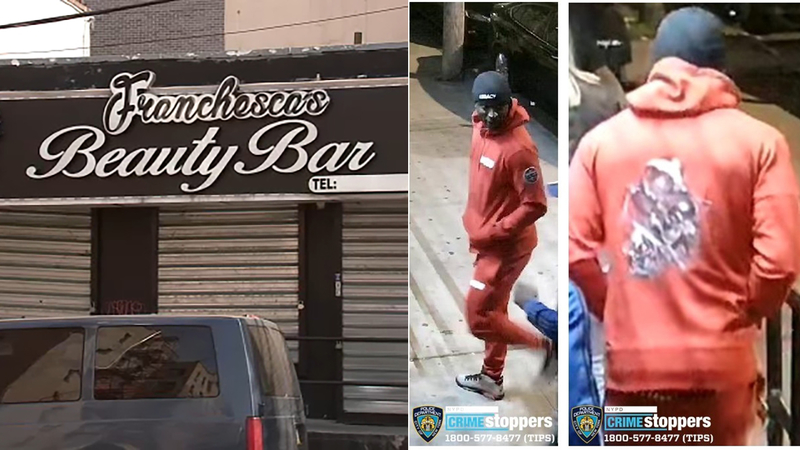 BELMONT, The Bronx (WABC) -- Police are continuing to investigate a deadly shooting at an underground and illegal party in the Bronx, and they are hoping surveillance video will lead to an arrest.

"When you see the video, it's really quite gruesome," NYPD Chief of Detectives James Essig said. "Somebody could just walk up to somebody, stick a gun in his head and pull a trigger, and walk out of a bar. It's horrific."

Essig sat down exclusively with Eyewitness News, detailing the cold blooded murder of a man just waiting in line to use the bathroom.

"He's just an innocent victim who got caught up in a petty dispute," he said.

That petty dispute turned deadly early Sunday, May 9, at Franchesca's Beauty Bar, a salon turned illegal nightclub, on Third Avenue in the Belmont section of the Bronx.

"Two men are going to use the restroom...they get into a little dispute, they come back, there's some taunting," Essig said. "And then our perpetrator raises his arm, calmly walks over to him, pulls a gun, and shoots him in the head."

The victim was identified as 30-year-old Shamar Watt, of Barnes Avenue in the Wakefield section, an aspiring rapper whose last Instagram post was a flier promoting a birthday party on Saturday, May 8.

Surveillance video of that underground party shows people living it up well into Sunday morning.

Police say there were more than two dozen witnesses.

"There's 25 to 30 people that we can observe on camera in there," Essig said.

But so far, police have not been able to identify the alleged trigger man, last seen leaving in a black GMC SUV.

Now, Crime Stoppers is offering an increased reward of $3,500 for information leading to an arrest.

"We're asking anybody who knows anything about this heinous crime, please contact us," Essig said.