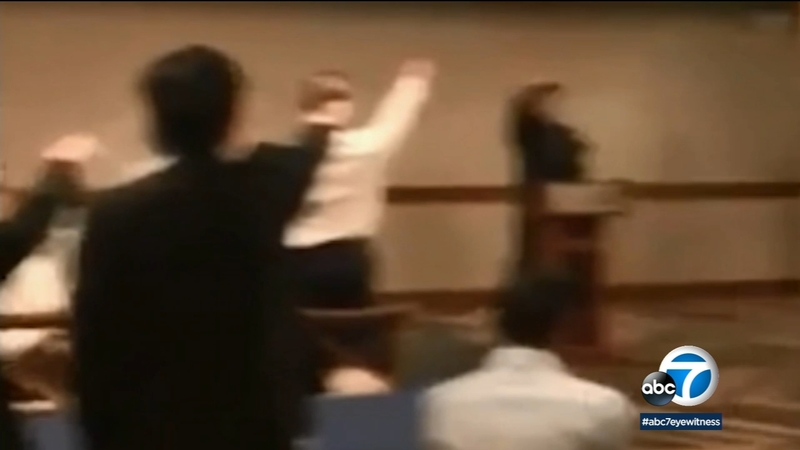 The eight-second video shows about 10 boys from Pacifica High School's water polo team at an off-site awards ceremony in December. No coach or adult is in view.

The teens appear to be gesturing, using a Nazi salute and singing a Nazi marching song once used to play for German troops and Adolf Hitler during World War II.

The video has since been taken down.

The school has about 1,650 students. Classes resume next week.

"I'm shocked that something like that would happen at our high school," said Mike Chambers, a former student and former parent at the school who lives near campus.

"That's one thing that kids just don't understand nowadays. Anything you post ... at some point in time, it will come out."

A spokeswoman for the Garden Grove Unified School District released a lengthy statement that reads in part:

"Garden Grove Unified School District and Pacifica High School strongly condemn a video recorded last year of some students who engaged in offensive Nazi-related gestures."
The school says the video was shared with a small group of students on Snapchat and didn't come to the attention of the district until March 2019 "at which time school administrators took immediate action and addressed the situation with all students and families involved."

This is the second incident involving teens and Nazi gestures in Orange County this year.

In March at Newport Harbor High, Snapchat images showed teens with arms outstretched in a similar salute gathered around red cups arranged in the shape of a swastika as teens played a common drinking game.

The Garden Grove district says it didn't alert the entire school community about the Pacifica incident because it involved an isolated group of students.

The district says it has reached out to community organizations to ensure an anti-bias environment and this year is launching a new campaign to "address issues of well-being and a welcoming climate, including addressing bullying, hate speech/actions, and our role in building inclusive communities which reflect equity and respect for all."