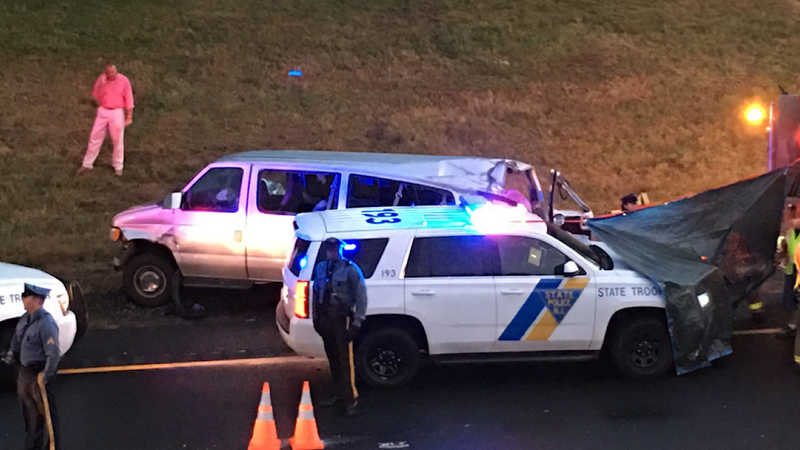 Two people were killed, and several others injured, when a van overturned in Holmdel Township.

The two killed have been identified by State Police as 30-year-old Irvington resident Charles Derosier and 56-year-old Esperanza Guardado-Quintani, of Elizabeth,

It happened on the GSP at 117 northbound at around 6:45 p.m. The accident happened during a thunderstorm that was moving through the area, although it's not yet known if that was a factor in the crash.

Derosier and Guardado-Quintani were ejected from the van and pronounced dead at the scene.

12 other people aboard the van, said to be coworkers, were injured. At least one person was in critical condition. The injured were all taken to Bayshore Hospital.

"Personally, anytime a trooper responds to that scene, they want to help. They want to do everything they can to help, and it's a chaotic scene with 14 people occupying the vehicle," said Sgt. Justin Hanna, New Jersey State Police.

"You think back, and I've seen a lot over the years, I've been doing this 16 years, 15 years, so these holiday weekends can bring out, or have a tendency to bring out these kinds of accidents. But I will think of my family, I think of my loved ones, and I thank God that everyone I know and love and care about is OK," said Mike Nikolas, Holmdel First Aid Squad.