8-year-old boy jumps from apartment fire in Indiana: 'I didn't want to die'

WLS
By Jessica D'Onofrio, Michelle Gallardo and Eric Horng
GARY, Indiana -- An 8-year-old boy jumped from the fourth floor of a burning apartment building in Indiana, a leap of faith that ended up saving his life.

"I didn't want to die," he said. "I was too young, so I asked for help and screamed out the window. I was just screaming my momma's name, everything. And I was just shaking."

Neighbors below scrambled to organize a rescue plan, despite firefighters' warnings to stay away. First they tried running into the building themselves, then they eventually grabbed blankets to form a makeshift safety net to catch the boy.

Still, he needed help and encouragement.

"And at first he didn't trust us," neighbor Seka McCelland said. "He like, 'No, no.' And we like, 'You gotta jump, you gotta jump."

Monty Spencer, 8, jumped from the fourth floor of a burning apartment building in Gary.

Spencer said his mother's orders convinced him to take the leap.

"My momma told me to jump out of the window and I did," he said. "So I listened to my momma, and they caught me and then that's when I survived."

Spencer thanked everyone who encouraged him to jump out the window and said he loved everyone that was there.

While Spencer's story had a happy ending, two young children who lived down the hall from him weren't as lucky.

Kailani Gober, 2, and her half-brother, Kristopher Hardin, 4, perished in the fire. Relatives said the children may have been in the unit where the fire started, and they may have been home alone. It's believed that a third sibling managed to escape the fire.

Kristopher Hardin's father said he had been trying to get fully custody of his now-deceased son.

"That was my baby. I loved him dearly, that was my heart," he said. "I felt like he was being neglected, and I also told the court system that."

ABC 7 has not been able to locate or contact the mother of the two children who died.

The fire displaced 54 families, many of whom are being housed at Gary's Majestic Star Hotel.

Investigators are still trying to determine the cause of the fire. 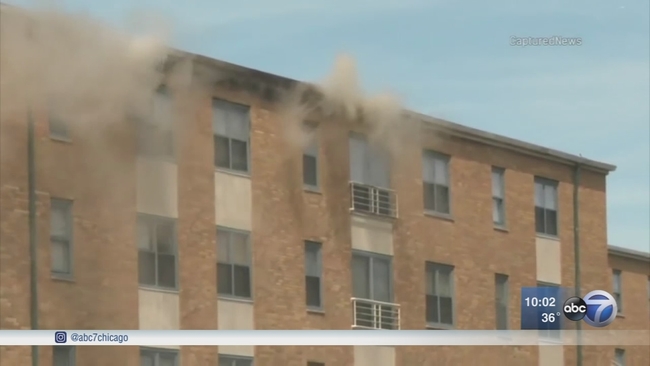