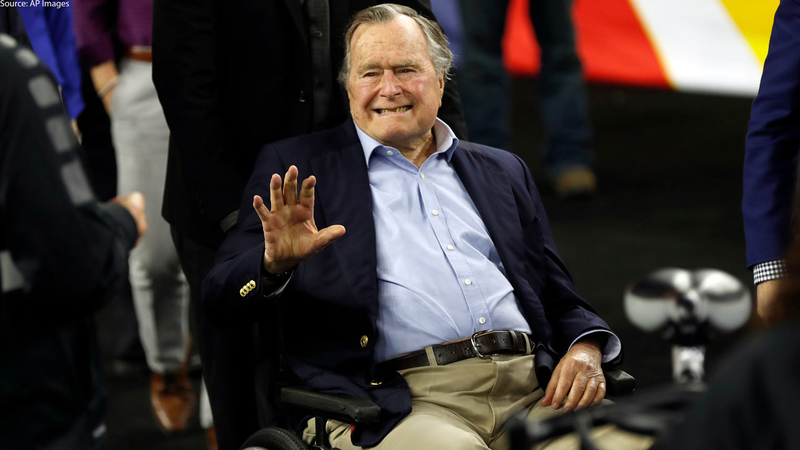 What to expect in days to come for George Bush services.

President George H.W. Bush is being honored around the country.

After arriving in Washington Monday afternoon, his body will lie in state at the U.S. Capitol Rotunda through Wednesday at 7 a.m.


Monday night in Houston, the public celebrated his life in a memorial tribute on Hermann Square in front of City Hall. The event, hosted by Houston Mayor Sylvester Turner and produced by the Mayor's Office of Special Events, was called "A Tribute to President George H.W. Bush."

The memorial service was filled with musical entertainment provided by the Houston Symphony; gospel music star Yolanda Adams, a friend of Bush who sang at many of Bush's birthday parties; country music star Clay Walker, who performed in 2014 at the 25th anniversary of Bush's presidency; and country music stars Larry Gatlin and the Gatlin Brothers, who befriended Bush in the 1960s.

Volunteers also collected donations of new pairs of colorful socks to be given later as holiday presents to beneficiaries of the Interfaith Ministries Meals on Wheels program. Pres. Bush was famous for wearing colorful socks.

The formal service will be held at the Washington National Cathedral at 11 a.m. EST on Dec. 5.

The White House announced Saturday that President Donald Trump and First Lady Melania Trump would attend the funeral at the cathedral.

Bush will depart Joint Base Andrews after the service at 1:15 p.m. EST Wednesday and will be flown to Ellington Field.

The former president's funeral will be held the morning of Dec. 6 at St. Martin's Episcopal Church. He will be laid to rest at the George H.W. Bush Presidential Library at Texas A&M University in College Station later that afternoon.

President George H.W. Bush will lie in state in Washington D.C. with a public visitation in Houston, before his final resting place in College Station.

According to a statement from the university, Bush will be buried in his family plot alongside Barbara and their daughter Robin.

George H.W. Bush, 41st President of the United States, will be laid to rest Thursday, Dec. 6 on the grounds of the @Bush41Library: https://t.co/yzw0jwBcwg #Honoring41 pic.twitter.com/kl3stU9Ejf