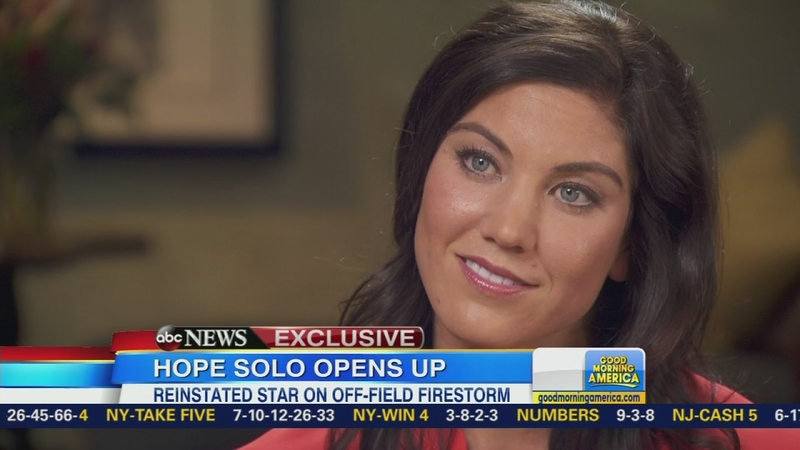 NEW YORK -- Soccer star Hope Solo is speaking out about her recent troubles in an emotional and exclusive interview with "Good Morning America's" Robin Roberts, saying that she was a victim of domestic violence.

This is Solo's first interview since facing domestic violence assault charges, which were later dropped.

"I was a victim of domestic violence at the hands of my 17-year-old nephew, who is 6-foot-9, 280 pounds. I was struck over the head and concussed pretty severely. It was a very scary night," she said.

Solo's half-sister, Teresa Obert, and her son released a statement in response to the interview maintaining that the 17-year-old was the victim.

"It does a disservice to domestic violence ... victims to suggest that one's physical size is a determinative of whether one is an abuser," the statement read.

The soccer star was also just reinstated to the U.S. Women's Soccer Team after a 30-day suspension.

The suspension came after her husband was pulled over on suspicion of DUI while driving a U.S. Soccer van with her in it.

"What in the world were you thinking?" Robin Roberts asked.

"Well, clearly, I wasn't thinking. I mean, it was a horrible choice. I think I just wasn't in a good place, emotionally, to, to even make good decisions. I mean, it's not an excuse but I just. It was stupid. Should've called a taxi," Hope Solo said.

Solo said her year has been traumatic, but she has learned the benefits of talking about everything that happened.

"I can cry it out. I can try to understand it. It's been healthy for me to just talk it out and to deal with my emotions instead of just tucking them away."

When asked how she hopes her fans will respond, Solo asked for forgiveness and said she continues to learn from mistakes.