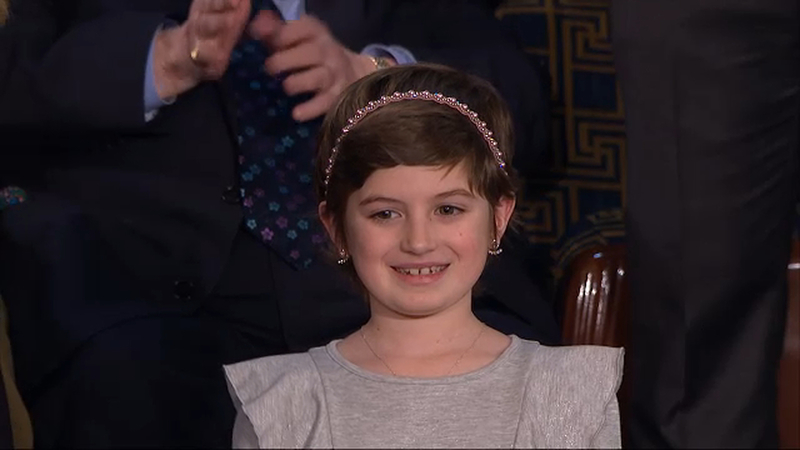 GILLETTE, New Jersey (WABC) -- A 10-year old girl from New Jersey who was honored during the President's State of the Union address for being a cancer survivor and fundraiser returned home after her whirlwind tour to the nation's capital.

"On a scale of one to ten, I'd have to say an ultimate ten," Grace Eline said.

Tuesday night she was in the House of Representatives for the President's address.

There she was sitting next to First Lady Melania Trump and being recognized for being a cancer survivor and her extraordinary cancer fundraising efforts.

"She rallied her community and raised more than $40,000 for the fight against cancer," President Trump said.

"I felt very special and honored that people were just cheering for me, so that was pretty special for me," Grace said.

"It was really celebrating her accomplishments because it was not easy what she did. And the second part was a way to bring awareness," her mother Aubrey said.

After Grace's diagnosis with a brain tumor last year, she and her family began working with The Valerie Fund which supports children with cancer and their families.

"She's a ten year old raising tens or hundreds of thousands of dollars to help other kids fighting the same battle she is," Executive Director of the Valerie Fund Barry Kirschner said.

Grace has big plans to continue her fund raising and staying positive as a cancer survivor.

"I think the lesson is to always keep a smile and find the positive," Grace said. "You should only find the light in the darkness, that's what I like to say."

"One thing this journey has taught us is to celebrate the small wins and don't take anything for granted," Aubrey said.

During her trip, she and her mother personally met the President.

"When you see him up close he is very nice," she said.

"She was very polite and she was checking on me to make sure that I was okay," Grace said about being with the First Lady.

She did mention the trip was an "ultimate 10".

For more information on The Valerie Fund, click here.