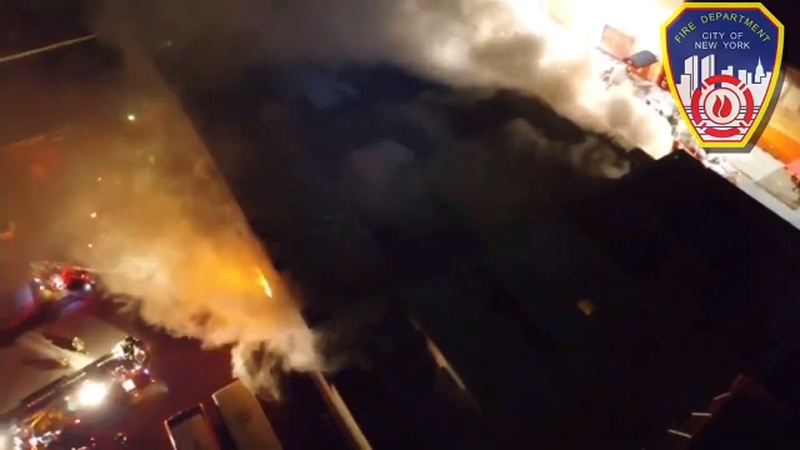 GREENPOINT, Brooklyn (WABC) -- Five firefighters were injured when a large blaze burned through a warehouse in Greenpoint, Brooklyn.

Emergency responders were called to the scene at the restaurant and supply warehouse on Monitor Street just after 12:30 a.m.

Firefighters battled heavy smoke conditions, and eventually some needed to be pulled from the large building. The building has multiple rows of shelving, which made it difficult to find the fire and run the hose lines

The FDNY used a drone to find the heavy fire and attack from the outside.

#FDNY members are operating on scene of 3-alarm fire, 259 Monitor St. in #Brooklyn. There are currently no injuries reported. pic.twitter.com/Qp029t6KEN

"We had some concerns with the wall in the rear of the building, we had some bulging of a wall in the rear of the building, we have fire units operating back there, but we've established what we call a collapse zone to keep everybody away from that to keep them safe," said John Richardson, the FDNY's chief of operations.
Some 200 firefighters responded to the scene. No one was inside the building when the fire started. The injured firefighters are said to have suffered minor injuries.

It took several house to bring the fire under control. The roof did not collapse but there are several holes in the roof, as well as concerns about the rear of the building possibly collapsing.

Scary scene in Greenpoint this morning but thanks to the outstanding work of New York’s Bravest, the fire is under control.

Please avoid the area around 259 Monitor Street as the FDNY completes their work. https://t.co/cuUuV73vQj